Israeli Forces Brace for Violence When Palestinians March for Statehood

Israeli forces are seeking to prevent bloodshed when Palestinians march in support of a statehood drive this month, but they are preparing for worst-case scenarios, even authorizing West Bank... 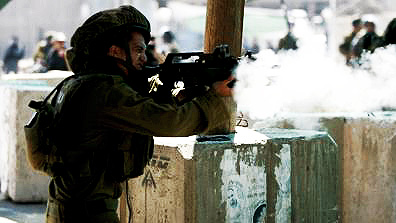 Aug. 26, 2011: An Israeli soldier fires tear gas canisters at Palestinian protesters during a protest march at the Qalandia checkpoint between the West Bank city of Ramallah and Jerusalem.
by Geoffrey Grider September 5, 2011
NOW THE END BEGINS SHARE:

An Israeli soldier fires tear gas canisters at Palestinian protesters during a protest march at the Qalandia checkpoint between the West Bank city of Ramallah and Jerusalem.

ELAZAR, West Bank — Israeli forces are seeking to prevent bloodshed when Palestinians march in support of a statehood drive this month, but they are preparing for worst-case scenarios, even authorizing West Bank settlers to shoot at Palestinians who approach their communities.

Aug. 26, 2011: An Israeli soldier fires tear gas canisters at Palestinian protesters during a protest march at the Qalandia checkpoint between the West Bank city of Ramallah and Jerusalem.

Palestinians say the rallies will be peaceful — a view shared by Israel’s own security assessments — and will steer clear of any settlements. Yet, the combustible atmosphere and the long and deadly history of Israeli-Palestinian violence are raising the specter that events might spin out of control.

For the Palestinians, the mass marches are intended to boost their campaign to get the U.N. to recognize an independent state, a strategy they are trying because negotiations aimed at bringing about a state through a peace deal with Israel have been stalled for two years.

Settlers living on land the Palestinians want for their future state have long been targets for militant attacks; likewise, some settlers have attacked Palestinian civilians. The fear among settlers now is that even unarmed crowds — if large enough — could overrun their communities.

Ilan Paz, a retired Israeli general who served in the West Bank for a decade, said a scenario with hundreds of casualties was not unthinkable.

“You can’t know how this sort of protest will end,” Paz said. “All sorts of local incidents can lead to injuries, and this can cause a deterioration in the situation.”

Israel’s army is training soldiers used to battling gunmen in non-lethal riot control tactics and inviting settlers to watch the drills at a military camp in a rural part of central Israel.

The mass demonstrations are set for around the time of the Sept. 13-22 United Nations General Assembly session, where the Palestinians hope to be granted official endorsement as a state. Some doubt the rallies will take place at all, however, and several Palestinian activist groups say they will not take part, believing the effort would achieve little.

Preparations undertaken by police are expected to cost Israel about $20 million, according to a senior police officer. Purchases include 16 long-range tear gas launchers, 15 trained Belgian horses to bolster the police’s mounted forces, and a weeklong riot training course for a quarter of the nation’s 28,000 police officers, he said.

Police expect Israeli-controlled east Jerusalem, home to 250,000 Palestinians, to be a flash point, he added. He spoke on condition of anonymity because of the sensitive nature of the precautions.