Israel Tells Russia They Will Wipe Out Syria If Assad Attacks

Israel has warned Damascus that if President Assad chooses to hit back at Israel for any further Israeli military strikes, Israel will bring down his regime.... 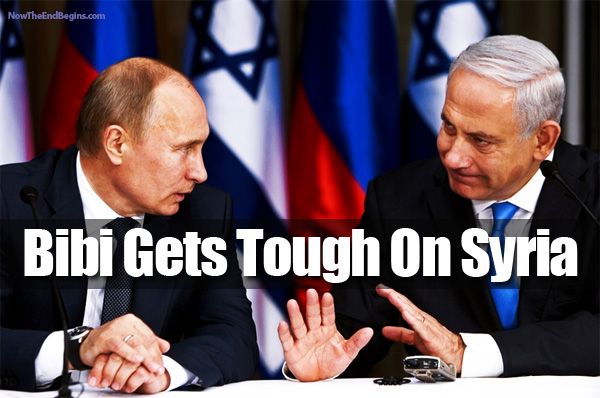 Israel has warned Damascus that if President Assad chooses to hit back at Israel for any further Israeli military strikes, Israel will bring down his regime.

An Israeli official confirmed Wednesday night that a dramatic and unprecedented message to this effect had been conveyed to Damascus, Channel 2 news reported.

The report said that Israel’s position to this effect also came up during Prime Minister Benjamin Netanyahu’s emergency meeting in Russia on Tuesday with President Vladimir Putin, during which Netanyahu also told Putin of Israel’s profound opposition to Russia’s sale of sophisticated S-300 missile defense batteries to Assad.

The warning came hours after mortar shells hit the Mount Hermon areafor the first time in the two-year Syrian civil war, and as Arabic newspapers reported talk of Hezbollah opening “a new front” against Israel on the Golan Heights.

Syria vowed last week to respond “immediately and harshly” to any further Israeli airstrikes, after Israel carried out two early morning attacks earlier this month on weapons consignments being stored in and around Damascus en route from Iran to Hezbollah in Lebanon. The shipments contained highly sophisticated Fateh-110 missiles.

Confirmation of Israel’s warning to Assad came soon after the New York Times quoted an Israeli official issuing the same threat. The New York Times said Israel was “considering further military strikes on Syria to stop the transfer of advanced weapons to Islamic militants,” and that an unnamed Israeli official had contacted the paper to warn: “Israel is determined to continue to prevent the transfer of advanced weapons to Hezbollah. The transfer of such weapons to Hezbollah will destabilize and endanger the entire region. If Syrian President Assad reacts by attacking Israel, or tries to strike Israel through his terrorist proxies, he will risk forfeiting his regime, for Israel will retaliate.”

“Israel will continue its policy of interdicting attempts to strengthen Hezbollah, but will not intercede in the Syrian civil war as long as Assad desists from direct or indirect attacks against Israel.”

The New York Times report speculated that Israel “could be trying to restrain Syria’s behavior without undertaking further military action, or alerting the international community to another strike. That would ratchet up the tension in an already fraught situation in Syria, where a civil war has been raging for more than two years.”

Channel 2 on Wednesday night showed satellite images of what it said was a surgical strike, reportedly carried out by Israel at Damascus airport to target the Iranian missile consignments. It showed before and after pictures of specific buildings that had been blown up, while neighboring buildings remained intact. Israel has not formally confirmed either of this month’s attacks.

Channel 2 said Netanyahu had made clear to Putin — as he also had in recent conversations with US President Barack Obama and the Chinese leadership — that Israel would hold to its “red lines” as related to Syria, which included preventing the transfer of sophisticated weaponry to Hezbollah and other rogue organizations. source – Times Of Israel