Israel will not be invited to NATO's May 20-21 summit in Chicago, the alliance's top official said Friday. But he denied that alliance member Turkey had blocked Israel's... 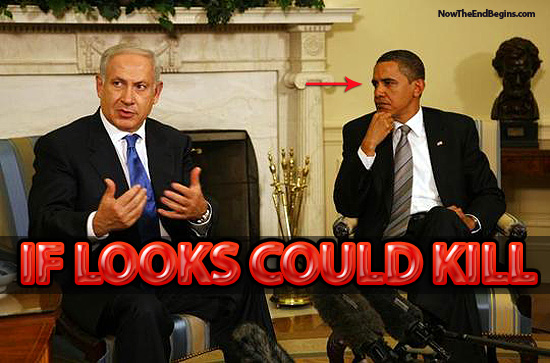 It is obvious to even the casual observer how much disdain Obama has for Netanyahu and the state of Israel
by Geoffrey Grider May 11, 2012
NOW THE END BEGINS SHARE:

Israel will not be invited to NATO’s May 20-21 summit in Chicago, the alliance’s top official said Friday. But he denied that alliance member Turkey had blocked Israel’s participation.

Instead, NATO Secretary-General Anders Fogh Rasmussen said the reason is because Israel does not participate in NATO’s main military missions.

News reports have claimed that Turkey blocked Israel’s participation because of the raid in 2010 by Israeli troops on ships heading to Gaza in which eight Turks and a Turkish-American died.

NATO has a system of partnerships with dozens of nations across the globe such as the Mediterranean Dialogue, a NATO outreach program with seven friendly nations, including Israel.

In the past, partner nations did not usually attend the alliance’s summits. But Fogh Rasmussen said 13 would do so this time.

“At the Lisbon summit (in 2010), we made clear that we would enhance dialogue and cooperation with partner nations … because in today’s world security challenges know no borders, and no country or alliance can deal with most of them on their own,” he told journalists.

Two other members of the Mediterranean group, Jordan and Morocco, are among them. But Fogh Rasmussen said Israel is not because it does not participate in missions in Afghanistan and Kosovo.

“Israel has not been invited to attend the summit because Israel is neither a participant in ISAF nor in KFOR … no one has blocked an invitation because it’s not been an issue,” Fogh Rasmussen said. ISAF and KFOR are acronyms for coalition forces in Afghanistan and Kosovo.

Earlier this year, Turkey scuttled a plan to include an Israeli warship in a NATO-run flotilla patrolling the Mediterranean.

In the past, Israeli warships and air force jets have joined in some NATO exercises, but Israel’s participation in the naval operation would the first time its armed forces have taken part in one of the alliance’s military operations.

Representatives of about 60 nations and international organizations will attend the Chicago conference. Partner nations include include Sweden, Switzerland, Qatar, Georgia, Australia and New Zealand.

Representatives of Russia and several Central Asian states also have been invited to discuss the war in Afghanistan — the summit’s main focus — “because they provide important transit arrangements to the benefit of our operation,” Fogh Rasmussen said. The alliance has repeatedly said it is prepared to enhance practical cooperation with all partner nations in the region, including Israel. But some members have opposed past attempts to forge closer cooperation with the Jewish state, saying that could hurt the alliance’s relations with other Muslim countries, including Afghanistan, which remains NATO’s top operational priority. source – ABC News