Throughout the day, Palestinians launched dozens of incendiary devices, carried by balloons, into southern Israel from the Gaza Strip. However, it was not immediately clear if the Eshkol fire was sparked by one of these objects.“At this point, the cause of the fire is not known. We will only know after a check by fire investigators,” a spokesperson for the Eshkol region said. The strike came after a large brushfire broke out in the Eshkol region of southern Israel on Wednesday night, with suspicions that it was caused by a balloon-borne incendiary device from the nearby Gaza Strip, officials said.

Israeli aircraft were striking target in the Gaza Strip early Thursday, Palestinian reports said after a wave of fire balloons were launched into Israel from the Gaza Strip.

Fire balloons are no joke, and have done millions of dollars in damage to myriad acres of fields in southern Israel since the Gaza Strip riots began a little over a year ago. They show no signs of abating anytime soon.

In keeping with Israel’s zero tolerance policy on attacks by Palestinians in the Strip, the Israel air force launched a series of targeted strikes early Thursday. We will update this story as events progress.

FROM THE TIMES OF ISRAEL: There was no immediate comment from the IDF. The reports said the aircraft bombed targets in northern Gaza. There were no reports of injuries. The strike came after a large brush fire broke out in the Eshkol region of southern Israel on Wednesday night, with suspicions that it was caused by a balloon-borne incendiary device from the nearby Gaza Strip, officials said. 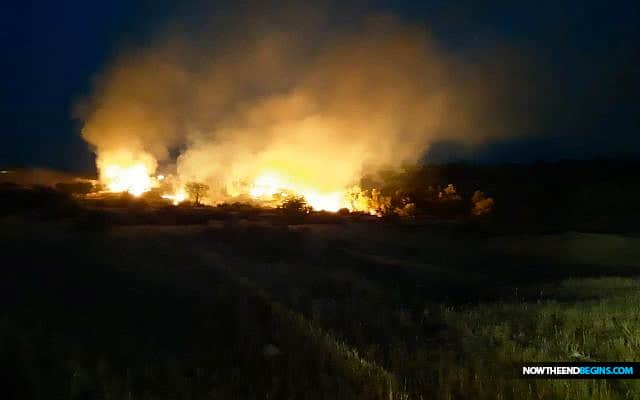 A fire rages in the Eshkol region of southern Israel on May 1, 2019. (Tzvika Korbeshi/Eshkol)

The blaze began in a field between the Eshkol National Park and Kibbutz Urim, spreading throughout the grasslands and into a wooded area, according to Fire and Rescue Department Eli Cohen.

The fire came amid heightened tensions between Israel and terror groups in the Strip, after a rocket was launched from the coastal enclave, landing several kilometers off shore on Monday night.

Throughout the day, Palestinians launched dozens of incendiary devices, carried by balloons, into southern Israel from the Gaza Strip. However, it was not immediately clear if the Eshkol fire was sparked by one of these objects.

“At this point, the cause of the fire is not known. We will only know after a check by fire investigators,” a spokesperson for the Eshkol region said.

Three teams of firefighters were working to put out the fire. In addition to the Fire and Rescue Department, firefighters from the Jewish National Fund and from the Parks Service were involved in the effort, the fire department spokesman said.

“The teams are working together to get control over the fire and prevent it from spreading,” Cohen said.

Due to the blaze’s location, the firefighters were not able to bring their trucks into the area, requiring them to use smaller, hand-held equipment to battle the flames, the fire department spokesman said.

On Tuesday, a fire broke out near Kibbutz Nahal Oz in the Sha’ar Hanegev region. That blaze was caused by a balloon-borne incendiary device launched into Israel from Gaza. In recent weeks, such arson attacks have tapered off under the ceasefire brokered by Egypt last month. That fire was quickly extinguished by a team of volunteers, the fire department said.

Also Tuesday, the Israeli military deployed Iron Dome missile defense batteries throughout the country, following a rocket attack from Gaza the previous night and ahead of what is expected to be a sensitive next few weeks.

The military expects the coming weeks to be particularly tense, as they will see the start of the Muslim holy month of Ramadan, the international Eurovision song competition in Tel Aviv, Israel’s Memorial and Independence days, and the first anniversary of the opening of the contentious US Embassy in Jerusalem.

Following Monday’s rocket launch, Israel scaled back the permitted Gaza fishing zone from 15 nautical miles to six until further notice. The fishing zone had previously been extended to 15 miles — a level that the coastal enclave has not seen in over a decade — as one of the first concessions by Jerusalem under an unofficial ceasefire agreement with terror groups in the Gaza Strip.

On Tuesday morning, the IDF said the Islamic Jihad intentionally fired the rocket from the northern Gaza Strip toward coastal Israel the day before in an effort to derail ongoing efforts to maintain the ceasefire.

While there has not been a complete cessation of violence along the Gaza border since the ceasefire went into effect last month, the situation there has been relatively calm. Terror groups in the Strip have threatened to bring back regular border riots if Israel does not abide by its side of the deal. READ MORE