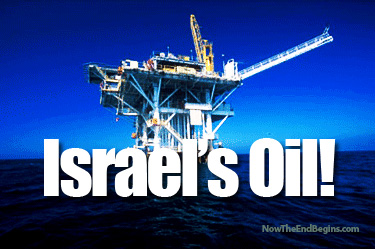 Is this the plunder of Ezekiel 38?

“Thus saith the Lord GOD; It shall also come to pass, [that] at the same time shall things come into thy mind, and thou shalt think an evil thought: And thou shalt say, I will go up to the land of unwalled villages; I will go to them that are at rest, that dwell safely, all of them dwelling without walls, and having neither bars nor gates, To take a spoil, and to take a prey; to turn thine hand upon the desolate places that are now inhabited, and upon the people that are gathered out of the nations, which have gotten cattle and goods, that dwell in the midst of the land.” Ezekiel 38

From Israel National News: Dr. Harold Vinegar of Israel Energy Initiative Ltd. in Jerusalem is optimistic about Israel’s potential in the oil industry. He spoke to Israel National Radio’s Goldstein on Gelt show with Douglas Goldstein about energy independence and the “black gold” that is underfoot.

Douglas Goldstein: What are unconventional oil reserves?
Dr. Harold Vinegar: Conventional oil is what everyone imagines. You drill a well and oil comes out of the well under the natural forces in the ground and you basically have an oil and gas well, but there’s a whole other class of oil called “unconventional oil.” This means that when you drill those wells, the oil will require some special treatment in the sub surface in order to get it to move.
There are two classes of unconventional oils. One is the heavy oils in tar sands such as you find in Canada. These are extremely viscous molasses-like oils that need heating in the sub surface in order to get them to move, and the other class is the oil shales of the world, and these have the organic matter that makes up the carriage. It’s solid and it requires heating to a high enough temperature so that the solid basically becomes a liquid in the sub surface and then gets produced as conventional oil once it’s been heated. Those are the unconventional sources of oil.
Israel has oil shale. It doesn’t have much heavy oil, but its oil shale resources are world class, one of the largest and best in the world.
Douglas Goldstein: Why are we only finding out about this now? What’s the history of oil in Israel?
Dr. Harold Vinegar: The oil shales were basically not developed in Israel for two reasons. The first is that basically for as long as I can remember the real price of oil was $130 per barrel, going way back in my career. It’s always been roughly $20 to $25 per barrel in inflation-adjusted terms. That’s just not high enough for the capital cost required to produce unconventionals. You need something of the order of $30 per barrel and starting around 2003, the price of oil on the marketplace started rising and it’s been going up continuously since then and probably will continue to go up. Right now, we see Brent Crude at about $120 per barrel. The time has come that unconventionals are actually economic to develop and this plays in Israel’s favor because it has enormous quantities of this oil shale.

“And of Asher he said, Let Asher be blessed with children; let him be acceptable to his brethren, and let him dip his foot in oil.” Deuteronomy 33:24

Douglas Goldstein: When you say enormous, what are the specs of that?
Dr. Harold Vinegar: Our company has mapped over 250 billion barrels of recoverable oil in Israel and that’s a conservative estimate. To put that in perspective, Saudi Arabia has about 250 billion barrels of conventional oil reserves in the ground.
What has happened with time is conventional oil has gotten more expensive and unconventional oil has gotten less expensive because there’s a small amount of conventional oil left in the world. Its price is driven by scarcity and as it becomes scarcer, the price goes up. Whereas unconventionals have enormous reserves, they swamp the amount of conventionals. Orders have more magnitude but their cost is driven by technology and if technology improves, the unconventional gets cheaper. Starting a few years ago, they’ve crossed over. The two supply curves have crossed so that marginally the conventional oil that the companies are going after in the Arctic, deep offshore, are actually more expensive than the development of the unconventional, such as the tar sands in Canada and the oil shales in Israel. It’s a flip. Things have changed.
Douglas Goldstein: One of the big complaints that people have about oil shale is that the technology to get it out of the ground can have some bad environmental effects.  Is this true or are there ways of dealing with that?
Dr. Harold Vinegar: It’s true that oil shale has to be heated in the subsurface in order to convert it to oil and gas.  One has to be careful in terms of the technology that’s deployed and the local geology to be sure that there are not any negative environmental effects. Israel is blessed by having a geological and hydrogeological situation where the aquifers are far below the oil shale and separated from it by 200 meters of impermeable rock, so that there will not be any environmental issues associated with the Israeli oil shale. That’s different than some of the other oil shales in the world, where the aquifer actually flows through the oil shale. Then you have to be very careful about what technology is used to develop it.  Israel is in a very good situation that way, enormous reserves, very high quality oil, and very safe environmental issues.
Douglas Goldstein: Why is this not being actively pursued?
Dr. Harold Vinegar: We’re starting up our program here.  The first thing that has to be done of course is to appraise the resource. Is it really there? You have to convince yourself that it’s as large and of high quality as I’ve indicated. Our company has been doing an appraisal program. We drilled six appraisal wells in the Shfela Basin, taken thousands of feet of core, and it really is a world class resource.
In the laboratory, we’ve heated the oil shale up and we produced the oil from it. It’s very light. It almost looks like a rosé wine. The thickness of the resource is 300 meters thick.  It’s enormously rich and has a very small surface footprint, which is the characteristic of oil shale in general.  It’s the densest fossil fuel resource in the world so that projects that are done in oil shale don’t have a very large surface footprint compared to conventional oil.
Douglas Goldstein: Are we seeing companies like Royal Dutch Shell come in with tens of billions of dollars of investment to get the oil out of the ground?
Dr. Harold Vinegar: You’re not seeing Royal Dutch Shell coming into Israel, but they are in the sister deposit in Jordan. During the cretaceous period, about 70 million years ago, Israel and Jordan both were under the sea and they both had simultaneous deposition of the oil shale. They both have equivalent and sister deposit characteristics, and Royal Dutch has been drilling in Jordan for the last few years. They have drilled hundreds of wells and Jordan also has extremely rich oil shale.
What you’re not going to see in Israel is any of the major integrated oil companies coming here. When you do a lot of business in the Arab world, it’s just not advisable for these companies to enter the Israeli market, but the smaller independent oil companies that aren’t doing business there are definitely interested and we’ve had a lot of interest in our company. We’re traded on the New York stock exchange under Genie GNE and our particular company is valued at $250 million.
Douglas Goldstein: Does your company do the research?
Dr. Harold Vinegar: We are a RND and exploration company focused on oil shale and other unconventionals in Israel and other countries of the world. It’s the only pure play that I know of in the oil shale domain. A lot of major oil companies have very small roots in the big companies that work on oil shale, but we are the only company that’s focused entirely on oil shales. We have a lot of intellectual property here. We’re doing research on improving the technology for developing the oil shales and we’re searching for oil shales that meet the characteristics where the technology will be effective and economical.
Douglas Goldstein: How can people follow your work or follow what’s going on in the Israel shale oil area?
Dr. Harold Vinegar: Our company has a website, http://iei-energy.com, and you can read about our developments here. I think the takeaway message that I would like to give is that Israel has an extremely bright energy future. The growth of the natural gas discoveries and the Mediterranean as well as the enormous oil shale deposits on shore means that Israel is going to be a major oil and gas exporting country in the future. Things are really exciting here. source – Israel National News