SAVED BY THE BLOOD: Israel Gives The Order For A Nationwide Passover Lockdown In Stunning Similarity To The First Passover And The Destroyer

Israel is set for a nationwide lockdown in the lead-up to the Passover holiday, according to multiple reports, with ministers expected to approve the measure Monday night after ultra-Orthodox members of the cabinet reportedly opposed applying limits only to Haredi cities. “Will there be a total closure on the Seder? As it seems right now, the answer is yes,” he told Army Radio. “There will be strong enforcement in this regard so that everyone will celebrate the festival with his or her family only.”

Israel is set for a nationwide coronavirus lockdown in the lead-up to the Passover holiday, The lockdown is set to take effect at 4 PM on Tuesday afternoon, and to remain in force until early Friday morning.

While reading the news on the Times Of Israel site just now, my eye caught the top headline, and it sent a chill down my spine. It read ‘Israel Set For Nationwide Lockdown From Tuesday Afternoon To Early Friday‘, talking about how the entire nation of Israel will be in quarantine for the start of Passover at sundown on April 8th. On the night of the very first Passover in Egypt, the Jews were also quarantined on lockdown waiting for the angel of death to pass by. Amazing, isn’t it?

“Then Moses called for all the elders of Israel, and said unto them, Draw out and take you a lamb according to your families, and kill the passover. And ye shall take a bunch of hyssop, and dip it in the blood that is in the bason, and strike the lintel and the two side posts with the blood that is in the bason; and none of you shall go out at the door of his house until the morning. For the LORD will pass through to smite the Egyptians; and when he seeth the blood upon the lintel, and on the two side posts, the LORD will pass over the door, and will not suffer the destroyer to come in unto your houses to smite you. And ye shall observe this thing for an ordinance to thee and to thy sons for ever.” Exodus 12:21-24 (KJB)

As we have been telling you from the very first day of 2020, prophetic activity is off the charts, so much so that we see an incredible parallel between the past 3 months and the ‘beginning of sorrows‘ mentioned in Matthew 24. Now we have the entire nation of Israel, God’s chosen people the Jews, who will be quarantined in their homes as Passover begins. Just like the Jews from Exodus were so many millennia ago.

“But he that entereth in by the door is the shepherd of the sheep. Then said Jesus unto them again, Verily, verily, I say unto you, I am the door of the sheep. I am the door: by me if any man enter in, he shall be saved, and shall go in and out, and find pasture. The thief cometh not, but for to steal, and to kill, and to destroy: I am come that they might have life, and that they might have it more abundantly.” John 10 (KJB)

The Passover with the shed blood of a lamb applied to the door is beautiful typology for the Lamb of God, Yeshua Ha’Mashiach, who shed His blood on Calvary and who is the Door by which we must enter if we wish to gain entrance to Heaven. This Passover, pray for the nation of Israel, and pray for the Jewish people that their eyes will be open to see that Jesus of Nazareth is the Passover Lamb, and that His blood saves them from the Destroyer.

FROM THE TIMES OF ISRAEL: Israel is set for a nationwide lockdown in the lead-up to the Passover holiday, according to multiple reports, with ministers expected to approve the measure Monday night after ultra-Orthodox members of the cabinet reportedly opposed applying limits only to Haredi cities.

The lockdown is set to take effect at 4 PM on Tuesday afternoon, and to remain in force until early Friday morning. In addition, a curfew could be announced on Passover eve, banning all movement outside the home Wednesday evening. 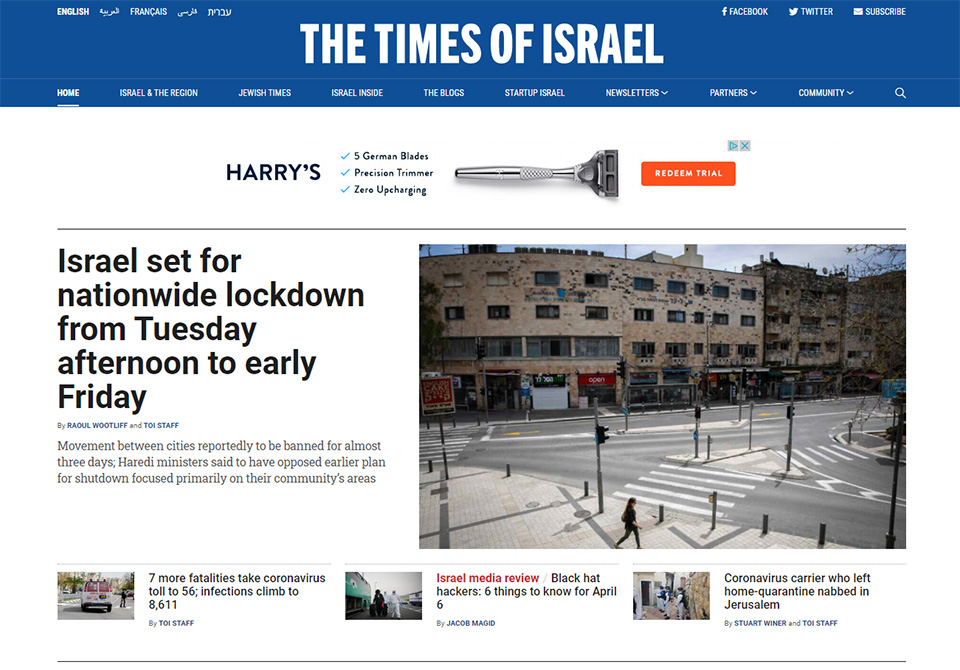 Israel is set for a nationwide lockdown in the lead-up to the Passover holiday, according to multiple reports, with ministers expected to approve the measure Monday night after ultra-Orthodox members of the cabinet reportedly opposed applying limits only to Haredi cities.

A ministerial meeting scheduled for Monday afternoon, during which lockdown measures on eight cities were meant to be authorized, was canceled shortly before it was set to start. Instead, ministers will meet for a remote cabinet meeting Monday night during which they are expected to approve new emergency regulations to apply nationwide. The closure is be extended to the entire country, rather than a handful of cities, after ultra-Orthodox ministers — United Torah Judaim chair Yaakov Litzman and Shas chair Aryeh Deri — protested the restrictions being rolled out largely in Haredi areas.

According to multiple Hebrew media reports, the lockdown would prevent most Israelis from leaving the municipal boundaries of their own cities, though they would be allowed to shop for essential supplies within the borders of their cities or regions within the cities.

A spokesperson for the Prime Minister’s Office declined to comment on the reports and would not confirm or deny whether a nationwide lockdown was being considered or why the ministerial meeting had been delayed.

On Sunday, Deri said the government was considering imposing a general lockdown over all of Israel ahead of the Passover holiday.

Deri, the interior minister, told Channel 12 that the potential nationwide closure was aimed at stopping extended families from gathering Wednesday night for the Passover Seder, the first eve of the seven-day festival, which is traditionally celebrated in large groups. Deri called for Israelis to prepare for the potential closure and said anyone driving that evening could be stopped by police.

“Will there be a total closure on the Seder? As it seems right now, the answer is yes,” he told Army Radio. “There will be strong enforcement in this regard so that everyone will celebrate the festival with his or her family only.”

Earlier Monday ministers were reportedly poised to rule on enforcing a tighter closure over only eight cities and 15 ultra-Orthodox neighborhoods in Jerusalem to stem the coronavirus outbreak.

The cities that were set to be included in the decision were Tiberias, Elad, Migdal Haemek, Beitar Illit, Ashkelon, Or Yehuda, Modiin Illit, and parts of Beit Shemesh.

The Personal Connection In Passover

Dr. Soref joins us for a special Podcast to discuss his personal revelations into this passover season. Why did God require Israel to keep the lamb in their homes before the passover sacrifice? Discover amazing revelations in the traditional passover meal that point directly to Yeshua’s death burial and resurrection. And did the commandment to offer the first fruits point to our Messiah’s resurrection?

Saved by the Blood of the Crucified One

My absolute favorite hymn of all time, and my absolute favorite version of it, recorded live at a Baptist Blowout at Pensacola Bible Institute in 2010. Fun Fact: the man leading the singing, Bro. Dave Gervins, was my mailman growing up as a kid.