New York’s Empire State Building was lit in green late Friday to celebrate the Eid al-Fitr holiday that marks the end of Ramadan. ... 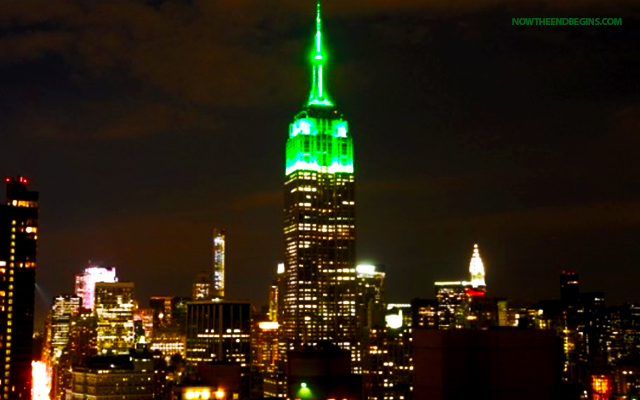 New York’s Empire State Building was lit in green late Friday to celebrate the Eid al-Fitr holiday that marks the end of Ramadan. It is astonishing to me to think that just a few years after the greatest terrorist attack to ever hit America was carried out by Muslims on 9/11, that the greatest symbol in the most famous in the world should pay homage to the Prophet Muhammad and the Devil’s religion of Islam. Do you think that such an act shows the forgiving nature of America? No, not at all. It shows how painfully sound asleep we are, and how unwilling we are to face up to what has become the threat of the century: Islamic terror attacks.

The Empire State Building is lit in green July 17, 2015 in New York City to celebrate the Eid al-Fitr holiday that marks the end of Ramadan. (AFP PHOTO/BRIGITTE DUSSEAU)

Just this week, ISIS released video of a little child beheading a prisoner in the name of Islam. Just two days ago, 5 US Marines were killed in an Islamic terror attack in Tennessee. Muslims immigrating to America is the fastest-growing segment of our population. The black flag of ISIS regularly appears in stories on evening news videos from every major city in America. FBI warnings of ISIS recruitment efforts happen on a weekly basis now, with high schools and social media being a main target. America is being Islamized at a frightening pace, with no abatement in sight.

Obama educating us on how Muslims helped to build America

FBI Director James Comey told the National Association of Attorneys General that ISIS is a “chaotic spider web” that avidly uses social media to radicalize people across the United States. “We have investigations of people in various stages of radicalizing in all 50 states,” said Comey, adding, “This isn’t a New York phenomenon or a Washington phenomenon. This is all 50 states and in ways that are very hard to see.”

Abraham Lincoln warned about this all the way back in 1838

As Obama continues to lead the way in our national glorification of Islam, virtually ignoring and explaining away countless acts of Islamic terrorism within our contiguous 48 states, our corporate slumber will only serve to make what comes next all the more heartbreaking and tragic. Obama has repeatedly said that one of his heros is Abraham Lincoln, so we will end this story with a Lincoln quote that in 2015 is eerily prophetic. It’s a quote from a speech by entitled “The Perpetuation of Our Political Institutions“, known as the Lyceum Address based on the location of its giving.

“Shall we expect some transatlantic military giant to step the ocean and crush us at a blow? Never! All the armies of Europe, Asia, and Africa combined, with all the treasure of the earth (our own excepted) in their military chest, with a Bonaparte for a commander, could not by force take a drink from the Ohio or make a track on the Blue Ridge in a trial of a thousand years. At what point then is the approach of danger to be expected? I answer. If it ever reach us it must spring up amongst us; it cannot come from abroad. If destruction be our lot we must ourselves be its author and finisher. As a nation of freemen we must live through all time or die by suicide.” Abraham Lincoln Address Before the Young Men’s Lyceum of Springfield, Illinois, January 27, 1838

By allowing America to be betrayed by our elected leaders, by turning a blind eye to the Islamization of our nation, we are in the very act of fulfilling Lincoln’s “prophecy”.

We are indeed the authors of our own destruction.