The savage slayings, before a crowd of intent spectators in a newly-revived Roman amphitheater in Syria, shows the group of doomed soldiers on their knees with their hands secured... 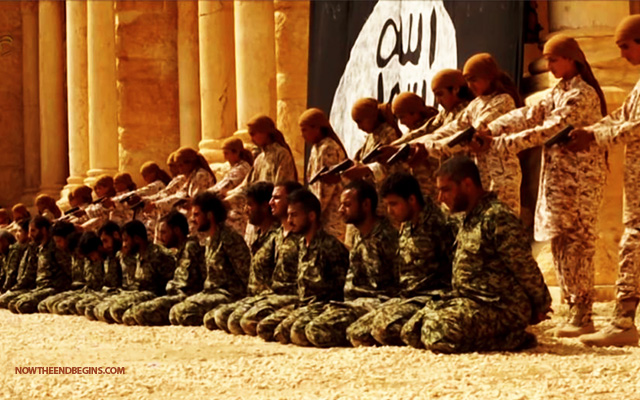 EDITOR’S NOTE: From a Bible prophecy perspective, a story like this is truly both amazing and sickening. The Bible says that in the end times after the Rapture of the Church, a time known as Jacob’s Trouble in the Old Testament and the Great Tribulation in the New Testament will arise. The weapons will be low-tech and barbaric, and the ancient Roman Empire will be revived. So the fact that ISIS has chosen a Roman setting where Christians were once fed to lions to do their slaughter is a huge end times prophecy red flag.

The savage slayings, before a crowd of intent spectators in a newly-revived Roman amphitheater in Syria, shows the group of doomed soldiers on their knees with their hands secured behind their back. A large black Islamic State flag hangs behind the Syrian prisoners, who were simultaneously executed after the reading of a death sentence, the BBC and Al Arabiya News reported Saturday.

It was unclear when the killings took place in the city of Palmyra, which was captured in late May by ISIS fighters. The youthful executioners appear to be as young as 13 or 14 years old. The 10-minute video begins with a reading of the Quran before the soldiers, all in chains, are led to a convoy of pickup trucks and driven to their deaths, according to Al Aribaya News.

GRAPHIC WARNING: This video contains scenes that are upsetting to some people

The camera zooms in on the bloody corpses once the synchronized slaughter is done. The youthful killers are all dressed in fatigues with headscarves, each standing behind their intended victims with a handgun. source