Islamic State, ISIS, revealed its new currency in a one-hour-long video entitled The Rise of the Khilafah and the Return of the Gold Dinar on Saturday, 29 August. The... 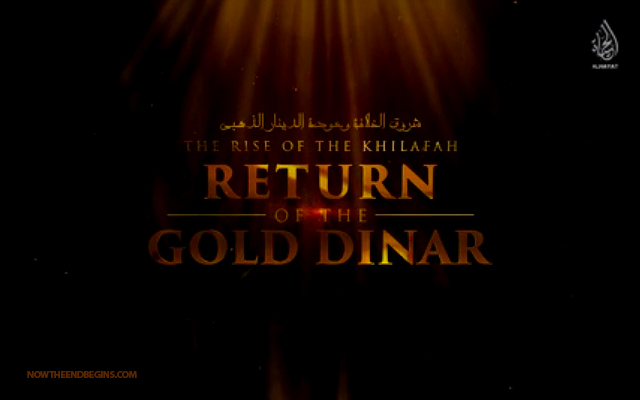 “This is the interpretation of the thing: MENE; God hath numbered thy kingdom, and finished it. TEKEL; Thou art weighed in the balances, and art found wanting. PERES; Thy kingdom is divided, and given to the Medes and Persians.” Daniel 5:26-28 (KJV)

EDITOR”S NOTE: The Islamic State, like the meteoric rise of Nazi Germany before them, continue to grow exponentially because the powers that could stop them refuse to do so. With the exception of a few pusillanimous air strikes, nothing is being done, the reach of ISIS has become terrifyingly large. One man, Adolf Hitler, brought the free world to the brink of destruction because no one stopped him when they could have. ISIS has more tangible power right now than Hitler and all his henchmen did in 1932. America, hear what the Prophet Daniel has to say. Mene, Mene, Tekel, Upharsin…

Islamic State, ISIS, revealed its new currency in a one-hour-long video entitled The Rise of the Khilafah and the Return of the Gold Dinar on Saturday, 29 August. The group said that the creation of the currency will help to break the “enslavement” of capitalism underpinned by the US dollar.

The release, which is narrated by an IS fighter with an American accent coupled with Arabic subtitles, shows plans for new gold, silver and copper coins in the group’s self-proclaimed caliphate which straddles the Iraqi-Syrian border. The group calls capitalism a “Satanic system” and goes on to condemn interest payments as the “most insidious instrument” of the US economy.

The footage was released by IS’ media wing Al-Hayat, and comes after the group announced it had plans to mint a new currency last November. The new currency will free members of IS’ caliphate from the “tyrannical monetary system that was imposed on the Muslims and was a reason for their enslavement and impoverishment, and the wasting the fortunes of the Ummah [the community of Muslims worldwide], making it easy prey in the hands of the Jews and Crusaders,” the group said in a statement, according to a translation by jihadi-monitoring company SITE Intelligence.