An outer suburb of Baghdad located only eight miles from the city's airport has now been breached by Islamic State (ISIS) forces as the jihadist group inches ominously close... 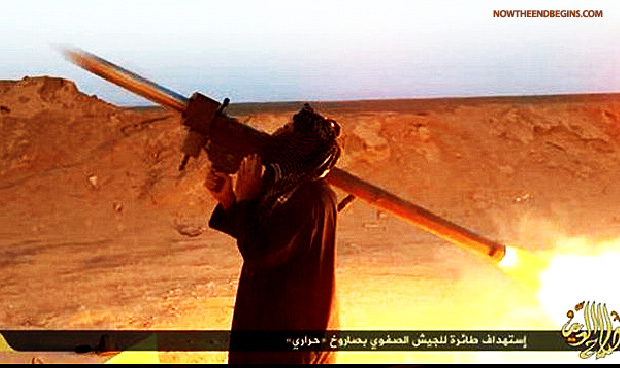 The well-armed ISIS army has flirted with advances close to the capital in recent months, but has not yet launched a full-blown offensive on Iraq's largest city.
by Geoffrey Grider October 11, 2014
NOW THE END BEGINS SHARE:

ISIS power is growing daily, despite the aerial bombardment from a US-led Allied coalition from nearly 50 different nations. Not only that, ISIS has now acquired MANPADS, shoulder-fired anti-aircraft missiles that they most likely got from recent victories in Syria. Nothing short of a fully-declared Gulf War III will be strong enough to stop the forward momentum of ISIS, and they know that American and Britain do not have an appetite to do that.

An outer suburb of Baghdad located only eight miles from the city’s airport has now been breached by Islamic State (ISIS) forces as the jihadist group inches ominously close to Iraq’s capital. The suburb of Abu Ghraib has been infiltrated by ISIS militants who are currently engaging in hit-and-run style attacks on local Iraqi security forces.

The well-armed ISIS army has flirted with advances close to the capital in recent months, but has not yet launched a full-blown offensive on Iraq’s largest city.

And as the U.S.-led coalition bombing campaign continues, CBS News reported ISIS is now in possession of MANPADS – shoulder-fired anti-aircraft missiles. Clashes for control of Abu Ghraib have been ongoing for more than a week, with government forces desperately trying to fend off the guerrilla warfare-style ISIS attacks.

Unfortunately, the U.S.-led aerial campaign has so far failed to stop much of the extremists’ advances towards Baghdad and other parts of Syria and Iraq.

There is only so much that can be done from the air to defeat an extremist force that has swept over much of Iraq and Syria. The Islamic State fighters have proven elusive and flexible, able to reorganize to minimize the blows.

And more importantly, there are almost no allied forces on the ground able to capitalize on the airstrikes and wrest back territory from the militants.