ISIS Militants Come To Europe And America Disguised As Refugees

Islamic State militants are planning to insert operatives into Western Europe disguised as refugees, claim US intelligence sources, who unencrypted locked communications of the caliphate’s leadership.... 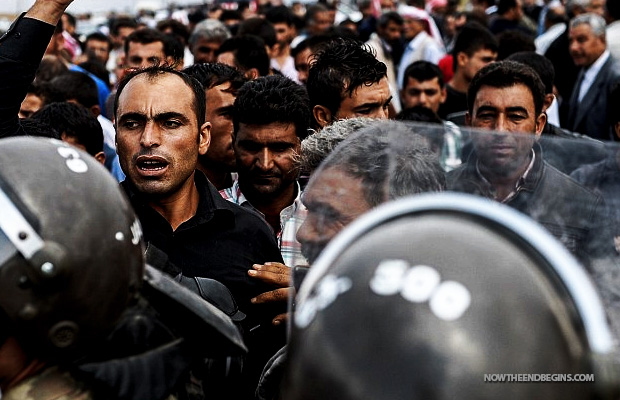 “In view of the chaotic conditions on the Syria-Turkey border, it is nearly impossible to catch ISIS-terrorists in the wave of refugees,” wrote Bild Am Sonntag.
by Geoffrey Grider October 7, 2014
NOW THE END BEGINS SHARE:

A Trojan horse that is nearly impossible to detect

Muslim terrorists love to deceive. During the last Israel-Hamas conflict, you had Hamas “soldiers” dressing up like women and firing rockets from inside of active hospitals and children’s schools. In Syria now, they are mixing in with the people that they have made war refugees and sneaking into various European countries with the plan of carrying out terror attacks once there. In America, they are coming in through Obama’s open door on the US – Mexico border, to carry out attacks here on our shores. That’s why Obama refuses to seal our border, he wants it to be open so we can aid the poor, impoverished “Mexicans”. Dark days indeed.

Islamic State militants are planning to insert operatives into Western Europe disguised as refugees, claim US intelligence sources, who unencrypted locked communications of the caliphate’s leadership. The militant organization is afraid of using aircraft due to strict security rules, so they use land as an alternative, the US sources told Bild Am Sonntag, a German national Sunday newspaper.

“In view of the chaotic conditions on the Syria-Turkey border, it is nearly impossible to catch ISIS-terrorists in the wave of refugees,” wrote Bild Am Sonntag.

Disguised as refugees from Syria, Islamic State (IS, formerly ISIS) operatives will cross the border to Turkey. Then, using fake passports, they will travel further to European countries to conduct attacks.

Because hundreds of refugees cross the Syrian-Turkish border every day, the jihadists have a good chance of remaining unnoticed in the crowds.

Turkey is also used by jihadists who want to join the IS in Syria, as they don’t need a visa to get there. They go on ‘vacations’ as tourists and upon arrival have almost no trouble finding a way to cross the border.

According to one of Iraq’s foremost security experts with unique access to intelligence, at least 100,000 jihadists were fighting in the ranks of the IS in August.

There are some 15,000 foreign fighters from the IS in Syria alone, including 2,000 Westerners, a US intelligence official told AFP in September.