Is Pope Francis Forming An Alliance With Islam?

“It is important to intensify dialogue among the various religions and I am thinking particularly of dialogue with Islam,” the new pontiff said in an address to foreign ambassadors... 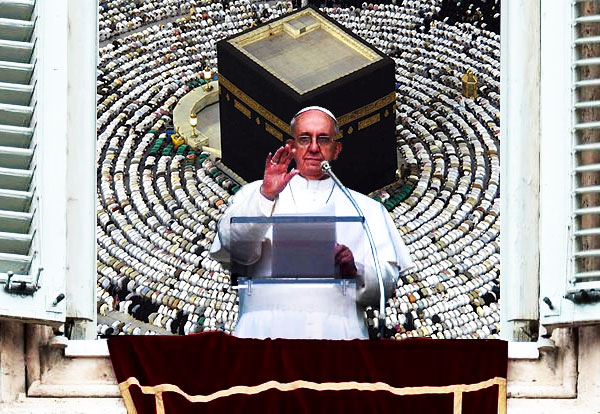 New Pope looking to unite all the world’s religions

Pope Francis on Friday called for the Roman Catholic Church to “intensify” its dialogue with Islam, echoing hopes in the Muslim world for better ties with the Vatican during his reign.

“It is important to intensify dialogue among the various religions and I am thinking particularly of dialogue with Islam,” the new pontiff said in an address to foreign ambassadors at the Vatican.

Francis’s predecessor Benedict XVI was seen by some Muslim leaders as hostile to Islam and the change at the top had been welcomed by the 57-member Organization of Islamic Cooperation and Al-Azhar, Sunni Islam’s highest seat of learning.

Ekmeleddin Ihsanoglu, head of the Saudi-based OIC, said earlier this month that he hoped “the relationship between Islam and Christianity will regain its cordiality and sincere friendship”. Mahmud Azab, adviser for inter-faith affairs to Al-Azhar imam Ahmed al-Tayyeb in Cairo, also told AFP earlier: “As soon as a new policy emerges, we will resume the dialogue with the Vatican”.

In his address on Friday, Francis also called for the Church to dialogue more with non-believers — returning to an effort begun during Benedict’s reign amid rising secularism in the Western world. “It is also important to intensify outreach to non-believers so that the differences which divide and hurt us may never prevail but rather the desire to build true links of friendship,” he said.

The Argentine pope said he wanted to “build bridges connecting all people” and said this was particularly significant for him personally because of his own Italian immigrant roots. source – Al Arabiya