Iran’s supreme leader, Ayatollah Ali Khamenei, all but said on Sunday that negotiations over the country’s illicit nuclear program are over and that the Islamic Republic’s ideals include destroying... 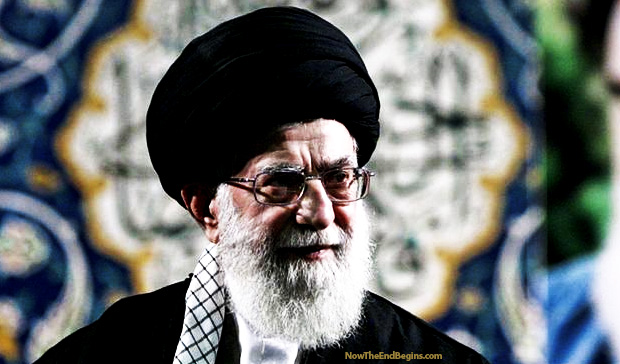 "This battle will only end when the society can get rid of the oppressors’ front with America at the head of it"
by Geoffrey Grider May 26, 2014
NOW THE END BEGINS SHARE:

Jihad must continue until America is no more

Iran’s supreme leader, Ayatollah Ali Khamenei, all but said on Sunday that negotiations over the country’s illicit nuclear program are over and that the Islamic Republic’s ideals include destroying America.

“Those [Iranians] who want to promote negotiation and surrender to the oppressors and blame the Islamic Republic as a warmonger in reality commit treason,” Khamenei told a meeting of members of parliament, Khamenei emphasized that without a combative mindset, the regime cannot reach its higher Islamic role against the “oppressors’ front.”

“The reason for continuation of this battle is not the warmongering of the Islamic Republic. Logic and reason command that for Iran, in order to pass through a region full of pirates, needs to arm itself and must have the capability to defend itself,” he said.

“Today’s world is full of thieves and plunderers of human honor, dignity and morality who are equipped with knowledge, wealth and power, and under the pretense of humanity easily commit crimes and betray human ideals and start wars in different parts of the world.”

In response to a question by a parliamentarian on how long this battle will continue, Khamenei said,“Battle and jihad are endless because evil and its front continue to exist. … This battle will only end when the society can get rid of the oppressors’ front with America at the head of it, which has expanded its claws on human mind, body and thought. … This requires a difficult and lengthy struggle and need for great strides.”

As reported on May 19 on The Daily Caller, Iran has put up new roadblocks to reaching a deal with the P5+1 world powers over its illicit nuclear program. The powers are the permanent members of the U.N. Security Council, plus Germany.

Three days of negotiations in the fourth round of Geneva meetings ended recently without concrete results when the Iranian team presented the country’s new “red lines” — diminishing any hope by the Obama administration to claim victory in its approach to Iran’s nuclear ambitions, according to reports from Iran.

The Obama administration had hoped that with Iranian President Hassan Rouhani and Foreign Minister Javad Zarif showing an eagerness to solve the nuclear issue and address the West’s concerns, there would be a possibility for a negotiated solution. An interim agreement penned last November in Geneva was touted as an “historic nuclear deal.”

Under that agreement, Iran, in return for billions of dollars in sanctions relief, limited its enrichment activity to the 5 percent level with a current stockpile of over 10 tons (enough for six nuclear bombs), converted much of its 20 percent enriched stock to harmless oxide, and agreed to allow more intrusive inspections of its nuclear plants by the International Atomic Energy Agency, whose inspections were limited to only agreed-upon facilities.

The Iranian delegation last week presented new red lines that could not be crossed, including the expansion of the country’s research and development for its nuclear program, the need of the country to continue enrichment, and the fact that the country’s ballistic missile program — despite U.N. sanctions — is not up for negotiation.

At the same time, IAEA officials met again with their Iranian counterparts last week in Tehran to discuss information on the work on detonators and needed collaboration by the regime to clear outstanding issues on its nuclear program as part of seven transparency steps Iran had agreed to fulfill by May 15, which has yet to take place. source – Daily Caller