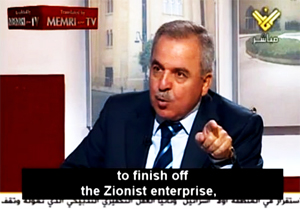 In a segment recorded and translated by MEMRI (the Middle East Media Research Institute), Sakariya, also a retired general, told his interviewer on Hezbollah’s al-Manar TV Tuesday that should Iran acquire a nuclear weapon it would serve Syrian as well as Iranian interests, namely the eradication of the Jewish state.

“This nuclear weapon is intended to create a balance of terror with Israel, to finish off the Zionist enterprise, and to end all Israeli aggression against the Arab nation,” Sakariya said.

“The entire equation in the Middle East will change,” he asserted.