A senior commander of the Islamic Revolution Guards Corps (IRGC) said Wednesday that Iran will continue boosting its military preparedness until it takes down Israel and sets Palestine free.... 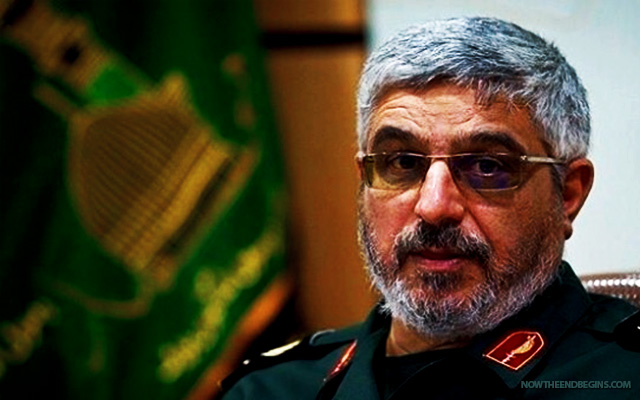 A senior commander of the Islamic Revolution Guards Corps (IRGC) said Wednesday that Iran will continue boosting its military preparedness until it takes down Israel and sets Palestine free.

EDITOR’S NOTE: As Barack Obama gathers the necessary votes to ram his phony Iranian Nuclear Deal through the Congress and Senate, Iran is openly bragging about their coming attack on Israel. You can wage a whole lot of war with $150,000,000,000.00 dollars, and that’s exactly how much this new deal puts in their pockets. So all you liberals who are applauding this deal, you will have Jewish blood on your hands, and the Lord God of Abraham, Isaac and Jacob will certainly have something to say about that.

TEHRAN (FNA) – “…they (the US and the Zionists) should know that the Islamic Revolution will continue enhancing its preparedness until it overthrows Israel and liberates Palestine,” IRGC’s top commander in Tehran province, Brigadier General Mohsen Kazzemeini, told operating units in Thar Allah Drills in the Iranian capital on Wednesday.

“And we will continue defending not just our own country, but also all the oppressed people of the world, specially those countries that are standing on the forefront of confrontation with the Zionists,” continued the General.

Some 250,000 Iranian Basiji (volunteer) forces in the form of 250 battalions started massive drills in Tehran on Wednesday and Thursday to practice fighting against security threats.

In relevant remarks in 2014, Supreme Leader of the Islamic Revolution Ayatollah Seyed Ali Khamenei noted that criminal acts of the wolfish and child-killer Zionist regime in Gaza had revealed its true nature, and said, “Only way to solve this problem is full annihilation and destruction of the Zionist regime.“

He also underlined that Palestinians should also continue their armed struggle against Tel Aviv.

“The armed resistance by the Palestinians is the only way to confront Israel,” Ayatollah Khamenei said addressing a group of Iranian university students in Tehran at the time. source