The Iranian government, through a website proxy, has laid out the legal and religious justification for the destruction of Israel and the slaughter of its people. Calling Israel a... 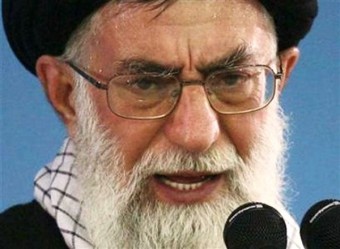 The Iranian government, through a website proxy, has laid out the legal and religious justification for the destruction of Israel and the slaughter of its people.

Calling Israel a danger to Islam, the conservative website Alef, with ties to Iran’s supreme leader, Ayatollah Ali Khamenei, said the opportunity must not be lost to remove “this corrupting material. It is a ‘jurisprudential justification” to kill all the Jews and annihilate Israel, and in that, the Islamic government of Iran must take the helm.”

The article, written by Alireza Forghani, a conservative analyst and a strategy specialist in Khamenei’s camp, now is being run on most state-owned conservative sites, including the Revolutionary Guards’ Fars News Agency, showing that the regime endorses this doctrine.

Because Israel is going to attack Iran’s nuclear facilities, Iran is justified in launching a pre-emptive, cataclysmic attack against the Jewish state, the doctrine argues.

On Friday, in a major speech at prayers, Khamenei announced that Iran will support any nation or group that attacks the “cancerous tumor” of Israel. Though his statement was seen by some in the West as fluff, there is substance behind it.

Iran’s Defense Ministry announced this weekend that it test-fired an advanced two-stage, solid-fuel ballistic missile and boasted about successfully putting a new satellite into orbit, reminding the West that its engineers have mastered the technology for intercontinental ballistic missiles even as the Islamic state pushes its nuclear weapons program.

The commander of the Revolutionary Guards, Brig. Gen. Seyyed Mehdi Farahi, stated in August that the Safir missile, which is capable of transporting a satellite into space, can easily be launched parallel to the earth’s orbit, which will transform it into an intercontinental ballistic missile. Western analysts didn’t believe this would happen until 2015. Historically, orbiting a satellite is the criterion for crediting a nation with ICBM capability.

Forghani details the Islamic duty of jihad as laid out in the Quran for the sake of Allah and states that “primary jihad,” according to some Shiite jurists, can only occur when the Hidden Imam, the Shiites’ 12th Imam Mahdi, returns. Shiites believe Mahdi’’s return will usher in Armageddon.

In the absence of the hidden Imam, Forghani says, “defensive jihad” could certainly take place when Islam is threatened, and Muslims must defend Islam and kill their enemies. To justify such action, Alef quotes the Shiites’ first imam, Ali, who stated “Waging war against the enemies with whom war is inevitable and there is a strong possibility that in near future they will attack Muslims is a must and the duty of Muslims.”

The article then quotes the Quran (Albaghara 2:191-193): “And slay them wherever ye find them, and drive them out of the places whence they drove you out, for persecution [of Muslims] is worse than slaughter [of non-believers] … and fight them until persecution is no more, and religion is for Allah.”

It is the duty for all Muslims to participate in this defensive jihad, Forghani says. A fatwa by the late Ayatollah Ruhollah Khomeini made it clear that any political domination by infidels over Muslims authorizes Muslims to defend Islam by all means. Iran now has the ICBM means to deliver destruction on Israel and soon will have nuclear warheads for those missiles.

In order to attack Iran, the article says, Israel needs the approval and assistance of America, and under the current passive climate in the United States, the opportunity must not be lost to wipe out Israel before it attacks Iran.

Under this pre-emptive defensive doctrine, several Ground Zero points of Israel must be destroyed and its people annihilated. Forghani cites the last census by the Israel Central Bureau of Statistics that shows Israel has a population of 7.5 million citizens of which a majority of 5.7 million are Jewish. Then it breaks down the districts with the highest concentration of Jewish people, indicating that three cities, Tel Aviv, Jerusalem and Haifa, contain over 60 percent of the Jewish population that Iran could target with its Shahab 3 ballistic missiles, killing all its inhabitants.

Forghani suggests that Iran’s Sejil missile, which is a two-stage rocket with a trajectory and speed that make it impossible to intercept, should target such Israeli facilities as: the Rafael nuclear plant, which is the main nuclear engineering center of Israel; the Eilun nuclear plant; another Israeli reactor in Nebrin; and the Dimona reactor in the nuclear research center in Neqeb, the most critical nuclear reactor in Israel because it produces 90 percent enriched uranium for Israel’s nuclear weapons.

Other targets, according to the article, include airports and air force bases such as the Sedot Mikha Air Base, which contains Jericho ballistic missiles and is located southwest of the Tel Nof Air Base, where aircraft equipped with nuclear weapons are based. Secondary targets include power plants, sewage treatment facilities, energy resources, and transportation and communication infrastructures.

Finally, Forghani says, Shahab 3 and Ghadr missiles can target urban settlements until the Israelis are wiped out.

Forghani claims that Israel could be destroyed in less than nine minutes and that Khamenei, as utmost authority, the Velayete Faghih (Islamic Jurist), also believes that Israel and America not only must be defeated but annihilated.

The radicals ruling Iran today not only posses over 1,000 ballistic missiles but are on the verge of ICBM delivery and have sufficient enriched uranium for six nuclear bombs even as they continue to highly enrich uranium despite four sets of U.N. sanctions.

The Iranian secret documentary “The Coming Is Upon Us” clearly indicates that these radicals believe the destruction of Israel will trigger the coming of the last Islamic Messiah and that even Jesus Christ, who will convert to Islam, will act as Mahdi’s deputy, praying to Allah as he stands behind the 12th Imam. source – WND

Tags
Ayatollah KhameneiiranIsraelmahdiqu'ranThe Coming Is Upon Us