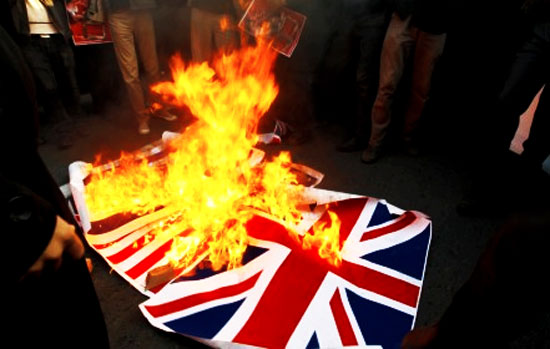 Iran’s semi-official Mehr news agency said protesters took six British diplomatic staff hostage from an embassy compound in the north of the city but it withdrew the story from its website minutes later without giving any explanation.

The attacks followed the rapid approval by Iran’s Guardian Council of a parliamentary bill compelling the government to expel the British ambassador in retaliation for the sanctions. A lawmaker had also warned Sunday that angry Iranians could storm the British Embassy as they did the U.S. mission in 1979.

Several dozen protesters broke away from a crowd of a few hundred protesters outside the main embassy compound in downtown Tehran, scaled the embassy gates and went inside.

Protesters pulled down the British flag, burned it, and put up the Iranian flag, Iranian news agencies and news pictures showed. Inside, the demonstrators threw stones and petrol bombs. One waved a framed picture of Queen Elizabeth, state TV showed.

Others carried the royal crest out through the embassy gate as police stood by, pictures carried by the official Fars news agency showed.

The British Foreign Office said it was outraged.

“There has been a incursion by a significant number of demonstrators into our Embassy premises, including vandalism to our property,” the Foreign Office said in a statement. “This is a fluid situation and details are still emerging. We are outraged by this. It is utterly unacceptable and we condemn it.

The Iranian government had a duty under international law to protect diplomats and London expected it to bring the situation under control and ensure the safety of the staff, the Foreign Office said.