Iran Warns US Carrier to Stay out of Persian Gulf

Iran will take action if a U.S. aircraft carrier which left the area because of Iranian naval exercises returns to the Gulf, the state news agency quoted army chief... 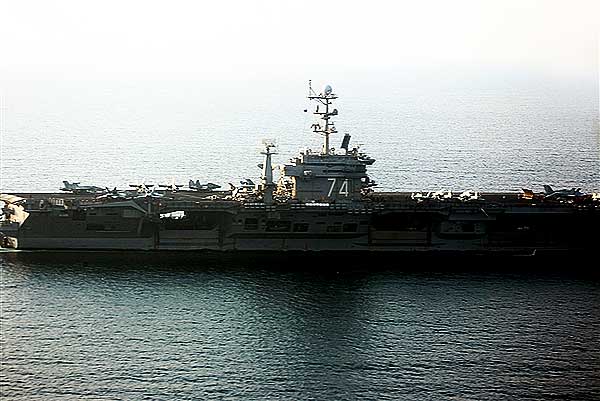 The USS John C. Stennis aircraft carrier is seen as it allegedly went "inside the maneuver zone" where Iranian ships were conducting war games in the Gulf, according to Iranian officials.
by Geoffrey Grider January 3, 2012
NOW THE END BEGINS SHARE:

Iran will take action if a U.S. aircraft carrier which left the area because of Iranian naval exercises returns to the Gulf, the state news agency quoted army chief Ataollah Salehi as saying on Tuesday.

The USS John C. Stennis aircraft carrier is seen as it allegedly went "inside the maneuver zone" where Iranian ships were conducting war games in the Gulf, according to Iranian officials.

“Iran will not repeat its warning … the enemy’s carrier has been moved to the Sea of Oman because of our drill. I recommend and emphasize to the American carrier not to return to the Persian Gulf,” Salehi told IRNA.

“I advise, recommend and warn them (the Americans) over the return of this carrier to the Persian Gulf because we are not in the habit of warning more than once,” the semi-official Fars news agency quoted Salehi as saying.

Salehi did not name the aircraft carrier or give details of the action Iran might take if it returned. However, last week a spokeswoman for the U.S. 5th Fleet said the USS John C. Stennis had left the Gulf.

Iran completed 10 days of naval exercises in the Gulf on Monday, and said during the drills that if foreign powers imposed sanctions on its crude exports it could shut the Strait of Hormuz, through which 40 percent of the world’s traded oil is shipped.

The U.S. Fifth Fleet, which is based in Bahrain, said it would not allow shipping to be disrupted in the strait.

Iran fires missiles
Iran said on Monday it had successfully test-fired two long-range missiles during its naval drill, flexing its military muscle in the face of mounting Western pressure over its controversial nuclear program.

Iran also said it had no intention of closing the Strait of Hormuz but had carried out “mock” exercises on shutting the strategic waterway. Iran announces a nuclear fuel breakthrough and test-fires a new surface-to-air missile in the Gulf on Sunday. NBC’s Kate Snow reports.

Tehran denies Western accusations that it is secretly trying to build atomic bombs, saying it needs nuclear technology to generate electricity. The United States and Israel have not ruled out military action against Iran if diplomacy fails to resolve the Islamic state’s nuclear row with the West. source – MSNBC