Iran has unveiled its own copy of an American stealth drone it captured in late 2011, claiming to have cracked the “secrets” of the bat-wing craft and added weapons... 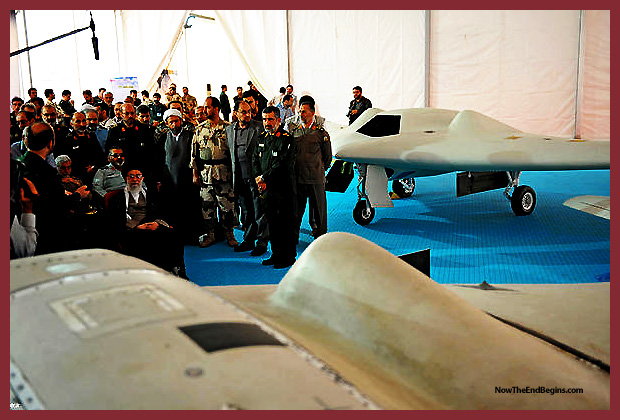 What's the best way to give Iran top-secret American drone technology to use against Israel? Let Iran "capture" one as it falls from the sky.
by Geoffrey Grider May 13, 2014
NOW THE END BEGINS SHARE:

Question Of The Day: When this drone was “captured” by Iran back in 2011, Obama could have immediately order that it be remotely destroyed through satellite and stealth technology so Iran could not have used it. So why didn’t he?

Iran has unveiled its own copy of an American stealth drone it captured in late 2011, claiming to have cracked the “secrets” of the bat-wing craft and added weapons capabilities. Today, Fars News Agency reported that while Iran’s duplicate of the US RQ-170 Sentinel drone was smaller, it also had a “bombing capability to attack the US warships in any possible battle.” The story in Persian was headlined: “America’s nightmare has become reality.”  State television showed footage on Sunday it said was of a US aircraft carrier in the Persian Gulf filmed by an Iranian drone.

What’s the best way to give Iran top-secret American drone technology to use against Israel? Let Iran “capture” one as it falls from the sky, and then make no effort to get it back.

The drone replica was unveiled at an Islamic Revolutionary Guard Corps (IRGC) exhibition on Sunday, where Supreme Leader Ayatollah Ali Khamenei was briefed on how the drone, its systems, and structure had been reverse-engineered. He called it a “sweet day.”

The stealth replica would “soon take a test flight,” an IRGC officer said on Sunday. Aerospace chief Amir Ali Hajizadeh said today that they are working on two more models of the replica drone.

Engineers with the IRGC  were ordered to reverse engineer the captured US drone, which was on a CIA mission to spy on nuclear and military sites in Iran when it was brought down in Iran largely intact. Iran reacted with euphoria, trumpeting the capture in an “electronic ambush” showed Iran’s technical prowess.

“And thus the Iranian-RQ [project] was designated,” said an IRGC aerospace officer, according to Fars News. “To achieve this, considering the difficulties and flight dynamics, we designed a bird with a smaller size that would be cheaper and simpler, and that we have done now. We have done ground tests already, and after this fair, we will do air tests too.”

“Here we didn’t know what type of information we were looking for. There was an issue of encoding and passwords, which thanks to God’s help we have overcome,” said the officer. He said data included video and advanced imaging and was “completely recovered.”

US officials said Iran was incapable of replicating the drone’s sophisticated radar-evading skin and shape, its aerodynamics, and top-of-the-line surveillance equipment, though it might be able to do so with the help of Russia or China. Iran has often made claims of cutting-edge military advances that later did not prove accurate, and it is not clear today what capabilities the replica has.

Khamenei said the lesson of the exhibition – which included unveiling a new cruise missile called “Ya Ali” with a 700 km range, among other new military hardware – was to show that Iranian engineers are capable.

“[It] gives the message of our internal power and capabilities … and declares that: ‘We can’,” said Khamenei. source – CS Monitor