Bigheaded from capturing the US stealth RQ-170 Sentinel drone, Tehran Monday, Dec. 12 announced plans to conduct a navy drill son for practicing the closure of the Strait of... 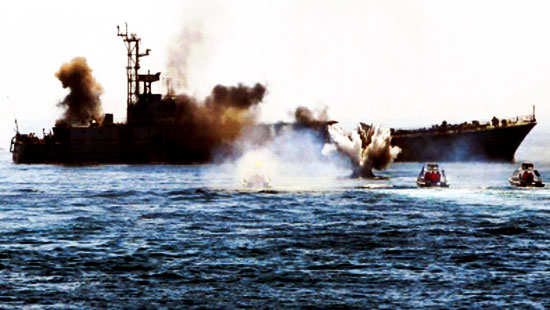 Big-headed from capturing the US stealth RQ-170 Sentinel drone, Tehran Monday, Dec. 12 announced plans to conduct a navy drill son for practicing the closure of the Strait of Hormuz, the most important oil transit channel in the world for 40 percent of its fuel. Iranian lawmaker Parviz Sorouri, member of the Majlis national security committee, who announced the drill said, “Iran will make the world unsafe if the world attacks Iran.”

On Dec. 12, US Defense Secretary Leon Panetta called Iran “a very grave threat to all of us” and warned that any Iranian disruption of the free flow of commerce through the Persian Gulf “is a red line” for the United Sates. Tehran’s announcement of a navy drill in Hormuz augments the Syrian ruler Bashar Assad’s mantra since his people rose up against him nine months ago, that an attack on his regime would start a regional blaze.

The Iranian lawmaker spoke at length about how his government planned to use the military and intelligence software mined from the top-secret US UAV on Dec. 4.

He said Iranian engineers and technicians were “in the final stages of “cracking” the drone’s secret technology, although he did not say when this research would be complete. “Our next action will be to reverse-engineer the aircraft,” he said and boasted: “In the near future will be able to mass produce it. Iranian engineers will soon build an aircraft superior to the American one.”

This data would also be used, the Iranian lawmaker said, in a lawsuit against the United State for the “invasion” by the unmanned aircraft. Sorouri did not say where the lawsuit would be filed but Tehran is thought to be preparing an complaint to the international war crimes court at the Hague.

debkafile’s Iranian and military sources note that the linkage Sorouri made between the capture of the RQ-170 and the naval drill in the Strait of Hormuz was intended to inform Washington that Tehran in possession of the drone no longer fears the ability of the naval air carriers the US has deployed in the Persian Gulf to prevent its closure of the strategic waterway.

In the last six months, Adm. Habibollah Sayyari has emphasized more than once that the Iranian Navy which he commands is master of the Persian Gulf and dominates the Strait of Hormuz. After trapping the American stealth drone, Iran is mounting a challenge to the warning issued by Panetta and testing the resolve of Washington and the Saudi-led Gulf Arab region to contest the Hormuz drill.

Mere verbal protest will not serve. It will just leave Tehran crowing over its possession of the US drone as the key to the military and intelligence mastery of the Persian Gulf waters and the ability to make US back down. However a real threat by the US and Gulf oil powers to stop the drill by force will send regional tensions shooting up.

In the meantime, Saeed Jalili, head of Iran’s National Security Council has arrived in Moscow to clinch a deal for the transfer of drone secrets to Russia in return for nuclear technology and sophisticated military hardware. source – DEBKA