Hundreds of Iranian troops have arrived in Syria in the last 10 days and will soon join government forces and their Lebanese Hezbollah allies in a major ground offensive... 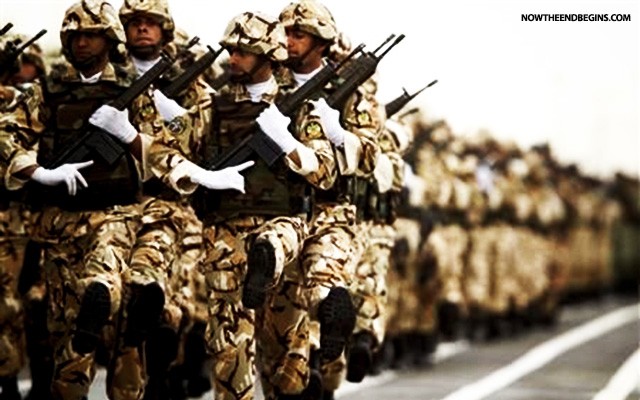 Hundreds of Iranian troops have arrived in Syria in the last 10 days and will soon join government forces and their Lebanese Hezbollah allies in a major ground offensive backed by Russian air strikes, two Lebanese sources told Reuters.

“Keep not thou silence, O God: hold not thy peace, and be not still, O God. For, lo, thine enemies make a tumult: and they that hate thee have lifted up the head.” Psalm 83:1,2 (KJV)

EDITOR’S NOTE: One day after Russia began airstrikes on pockets of resistance to the Assad regime in Syria, news had surfaced that Iran is sending ground troops to join the battle. Russia and Iran are not there to defeat ISIS, they are there to restore power to Syria’s President Bashar al-Assad. Huge difference. By doing this, a permanent military front will be created on Israel’s northern border. The complete balance of power in the Middle East has changed and seemingly overnight. But this is not random happenstance, this is the fulfillment of Bible prophecy. And where the American President as all this is happening? On the sidelines, pushing gay rights from the golf course.

“The Russian air strikes will in the near future be accompanied by ground advances by the Syrian army and its allies,” said one of the sources familiar with political and military developments in the conflict.

“It is possible that the coming land operations will be focused in the Idlib and Hama countryside,” the source added.

The two sources said the operation would be aimed at recapturing territory lost by President Bashar al-Assad’s government to rebels.

It points to an emerging military alliance between Russia and Assad’s other main allies – Iran and Hezbollah – focused on recapturing areas of northwestern Syria that were seized by insurgents in rapid advances earlier this year.

“The vanguard of Iranian ground forces began arriving in Syria: soldiers and officers specifically to participate in this battle. They are not advisors … we mean hundreds with equipment and weapons. They will be followed by more,” the second source said. Iraqis would also take part in the operation, the source said.

Thus far, direct Iranian military support for Assad has come mostly in the form of military advisors. Iran has also mobilized Shi’ite militia fighters, including Iraqis and some Afghans, to fight alongside Syrian government forces.

Lebanon’s Hezbollah, which is backed by Iran, has been fighting alongside the Syrian army since early in the conflict.

The Russian air force began air strikes in Syria on Wednesday, targeting areas near the cities of Homs and Hama in the west of the country, where Assad’s forces are fighting an array of insurgent groups, though not Islamic State, which is based mostly in the north and east.

An alliance of insurgent groups including the al Qaeda-linked Nusra Front and powerful Ahrar al-Sham made rapid gains in Idlib province earlier this year, completely expelling the government from the area bordering Turkey. source