A secret U.S. surveillance drone that went missing last week in western Afghanistan appears to have crashed in Iran, in what may be the first case of such an... 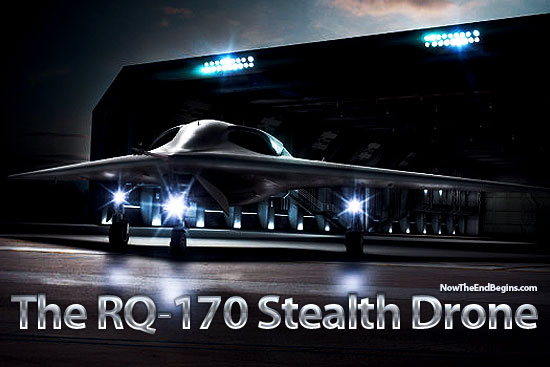 Manufactured by Lockheed Martin, the RQ-170 is a tailless flying wing with the telltale shape and surface contours of a stealth aircraft.
by Geoffrey Grider December 5, 2011
NOW THE END BEGINS SHARE:

A secret U.S. surveillance drone that went missing last week in western Afghanistan appears to have crashed in Iran, in what may be the first case of such an aircraft ending up in the hands of an adversary.

Manufactured by Lockheed Martin, the RQ-170 is a tailless flying wing with the telltale shape and surface contours of a stealth aircraft.

Iran’s news agencies asserted that the nation’s defense forces brought down the drone, which the Iranian reports said was an RQ-170 stealth aircraft. It is designed to penetrate enemy air defenses that could see and possibly shoot down less-sophisticated Predator and Reaper drones.

A stealthy RQ-170 drone played a critical role in surveilling the compound in Pakistan where Osama bin Laden was hiding in the months before the raid in which he was killed by U.S. Navy SEALs in May.

U.S. officials acknowledged Sunday that a drone had been lost near the Iranian border, but they declined to say what kind of aircraft was missing.

The Iranian government has not released any pictures of the recovered aircraft, which they said was downed by defense forces after it flew across the border and into the country’s airspace. An unnamed Iranian defense official said in one report that a cyber­attack caused the drone to crash.

If an RQ-170 drone crashed in Iran, it would mark a significant setback for the U.S. military. The United States has lost less-sophisticated unmanned aircraft in recent years over Iran, but a nearly intact RQ-170 could offer a potential windfall of useful intelligence for the Iranians and their allies.

The aircraft has special coatings and a batwing-like shape that is designed to evade detection by enemy radar. The aircraft could help the Iranians better understand the vulnerabilities of U.S. stealth technology and provide them with clues on how to spot other aircraft, U.S. officials said.

Similar stealth technology is used in U.S. B-2 bombers and is a major feature of the military’s F-35 fighter jet, which is one of the largest and most expensive weapons programs in Pentagon history.

The first reports of the drone crash came from Iran’s semiofficial Fars News Agency. “Iran’s army has downed an intruding RQ-170 American drone in eastern Iran,” the Arabic-language al-Alam state television network quoted an unnamed source as saying. “The spy drone, which has been downed with little damage, was seized by the armed forces.”

Hours after the incident, Iranian state TV news was showing only stock pictures of RQ-170 stealth drones, not images from the crash. An unnamed military official told the Fars News Agency that Iran’s response “will not be limited to the country’s borders.” The U.S. military released a short statement later Sunday on the missing drone. “The [unmanned aerial vehicle] to which the Iranians are referring may be a U.S. unarmed reconnaissance aircraft that had been flying a mission over western Afghanistan late last week,” it said. “The operators of the UAV lost control of the aircraft and had been working to determine its status.” source – WashPost