Iran Releases Video Of Israel Under Nuclear Attack As 10,000 Riot In West Bank

Violence broke out Thursday night near the Kalandia checkpoint in the West Bank, as some 10,000 Palestinians protested near the checkpoint, throwing rocks, firebombs and fireworks at Israeli security... 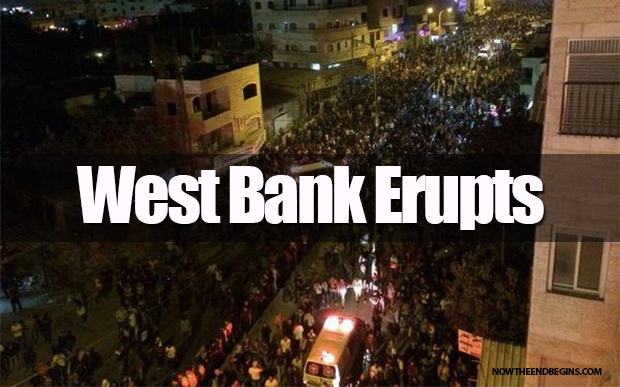 Events are reaching an unavoidable flash-point in Israel

“I have set watchmen upon thy walls, O Jerusalem, which shall never hold their peace day nor night: ye that make mention of the LORD, keep not silence, And give him no rest, till he establish, and till he make Jerusalem a praise in the earth.” Isaiah 62:6,7

Violence broke out Thursday night near the Kalandia checkpoint, located in the West Bank between Jerusalem and Ramallah, as residents of the West Bank village clashed with police in protests against the IDF’s operation in the Gaza Strip.

Some 10,000 Palestinians protested near the checkpoint, throwing rocks, firebombs and fireworks at Israeli security forces, and setting tires ablaze. The IDF forces and Border Police were using crowd dispersal means on the masses.

Iran’s supreme leader, Ayatollah Ali Khamenei, stated on Wednesday that the only solution for the region is the destruction of Israel, and that the armed confrontation must expand beyond Gaza. Meanwhile, revolutionary guards announced new missiles which could destroy Israel’s Iron Dome missile defense system.

Fars News Agency, a media outlet run by the Iranian state, reported today that Khamenei addressed the conflict in Gaza in a meeting with Iranian college students.

“These crimes which are beyond imagination and show the true nature of the wolfish and child killer regime, which the only solution is its destruction,” the ayatollah declared to his audience. “However, until that time, the expansion of the armed resistance of the Palestinians of the West Bank is the only way to confront this wild regime.”