“We are ready for the decisive battle with America and the Zionist regime (Israel),” Fars news agency quoted Firouzabadi as saying Wednesday.... 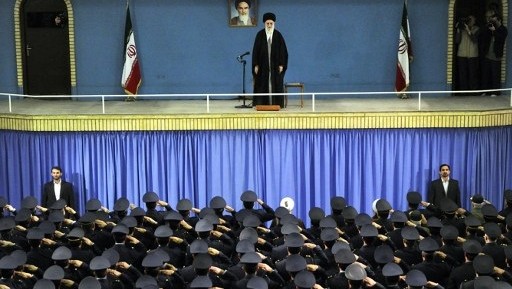 In the latest in a series of warnings against the US, Iran’s chief of staff Hassan Firouzabadi warned the Islamic republic’s foes that Iran is prepared for a “decisive battle” if attacked. “We are ready for the decisive battle with America and the Zionist regime (Israel),” Fars news agency quoted Firouzabadi as saying Wednesday.

He also warned neighboring nations not to allow any attack to be launched on Iran from their soil. “We do not have any hostility toward regional states, but if we are ever attacked from the American bases in the region we will strike that area back,” he said.

Washington has many military bases in the region, including in Bahrain, Kuwait, the United Arab Emirates, Saudi Arabia and Turkey. US Secretary of State John Kerry said late last month that if diplomacy with Iran fails, “the military option of the United States is ready and prepared to do what it would have to do.”

But Firouzabadi accused the US of bluffing.

“Over the past decade, they brought their forces but came to the conclusion that they can’t attack us, and left,” he said, dismissing the US military threat as nothing but a “political bluff.” Iranian President Hassan Rouhani said on Tuesday that the West should not have any delusions about using a military option.

“I say explicitly, if some have delusions of having any threats against Iran on their tables, they need to wear new glasses. There is no military option against Iran on any table in the world,” he said.

On Sunday, Iranian Revolutionary Guards Corps Navy Commander Ali Fadavi said the US knows that its aircraft carriers in the Persian Gulf would be sunk if it launched a military strike on Iran.

“The Americans can sense by all means how their warships will be sunk with 5,000 crews and forces in combat against Iran and how they should find its hulk in the depths of the sea,” said Fadavi, according to Fars news agency.

“They cannot hide themselves in the sea since the entire Middle East region, Western Europe, the Persian Gulf, the Sea of Oman and the Strait of Hormuz are monitored by us and there is no place for them to hide.”

“The Iranian Armed Forces are an intertwined and coherent complex that can give a decisive response to any threat at any level and any place under the command of the commander-in-chief,” Dehqan said in a ceremony marking the 35th anniversary of the revolution that brought the current Islamic regime to power.

“The enemy can never assess and think of the range of the response given by the powerful and mighty Armed Forces of the Islamic Iran,” he added.

The bellicose rhetoric follows Saturday’s announcement by an Iranian admiral that Iran had dispatched warships to the North Atlantic, while Iran’s spiritual leader Ayatollah Ali Khamenei denounced the Americans as liars who, while professing to be friends of Tehran, would bring down his regime if they could. He also said it was “amusing” that the US thought Iran would reduce its “defensive capabilities.”

On Friday, Iranian state TV ran a documentary featuring a computerized video of Iran’s drones and missiles bombing Tel Aviv, Haifa, Ben-Gurion Airport and the Dimona nuclear reactor in a simulated retaliation for a hypothetical Israeli or American strike on the Islamic Republic.

Iran is due to resume talks on Monday in Vienna with the P5+1 — Britain, France, the United States, Russia and China plus Germany — aimed at reaching a comprehensive nuclear accord following a landmark interim agreement struck in November.

Western nations have long suspected Iran of covertly pursuing nuclear weapons alongside its civilian program, allegations denied by Tehran, which insists its nuclear activities are entirely peaceful. Neither the United States nor Israel has ruled out military action to prevent Iran from developing a nuclear weapon, if diplomacy fails. source – Times of Israel