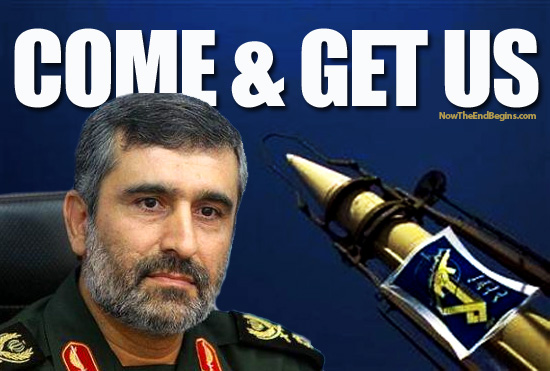 An Israeli strike on Iran would provoke a swift retaliation, allowing Tehran to “dump [Israel] into the dustbin of history,” Revolutionary Guards General Amir Ali Hajizadeh said Saturday, marking the latest threat in public tit for tat over a potential Israeli strike on Iran’s nuclear program.

“If the loud cries of the leaders of the Zionist regime are materialized, it would be the best opportunity for obliterating this fake regime from the face of the earth and dump it into the dustbin of history,” Hajizadeh said, according to Iran’s English-language state television network Press TV.

Hajizadeh’s comments came just one day after Iranian President Mahmoud Ahmadinejad referred to Israel as a western “tool to dominate the Middle East” and an “insult to all humanity,” in a speech given at a Tehran rally marking the annual Al-Quds (Jerusalem) Day. Ahmadinejad’s comment’s were condemned in the international community, and drew a strong rebuke by US Republican presumptive presidential nominee Mitt Romney, who said the speech was evidence of Iran’s “genocidal” intentions.

Hajizadeh, who heads the Revolutionary Guards’ airborne division, said “it will be a great honor for combatants and defense forces of the Islamic Iran to realize the ideal of the annihilation of the Zionist regime and shape the new Middle East on the basis of the will of regional Muslim states.”

In private meetings, Prime Minister Binyamin Netanyahu has been endorsing a strike on Iran‘s nuclear facilities even if such an attack would only temporarily set back Iran’s illicit nuclear program, The Jerusalem Post learned. The report echoes comments by Israel’s ambassador to the US Michael Oren, who said Wednesday that an attack would be worthwhile even if it failed to completely destroy the nuclear program.

Daring the IDF to strike, Hajizadeh said: “If… they take practical steps to put their threats into action, this would be the sole positive step taken by this ruthless and infanticidal regime throughout its foul life.” He added: “Iran’s response to any practical threat to or aggression against the Islamic Republic will be very fast, categorical, destructive, and overarching.” source – JPost