Iranian President Hassan Rouhani urged the entire country to “shout its hatred for the Zionists” and back Palestinian efforts to seize territory from Israel, according to comments made Wednesday... 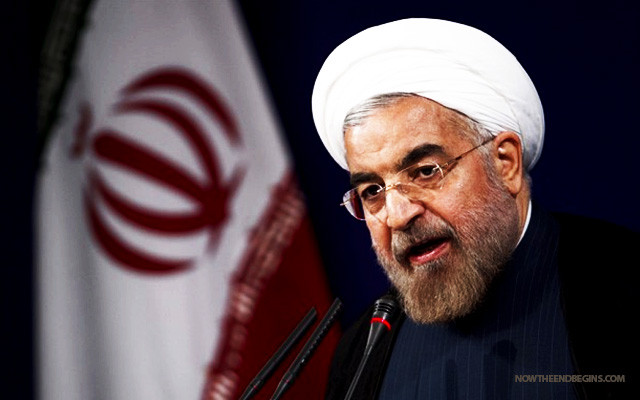 Iranian President Hassan Rouhani urged the entire country to “shout its hatred for the Zionists” and back Palestinian efforts to seize territory from Israel, according to comments made Wednesday in celebration of Quds Day, which marks the last Friday in Ramadan and has historically been used to tout Palestinian violence against the Jewish state.

“Let them all be confounded and turned back that hate Zion.” Psalms 129:5 (KJV)

EDITOR’S NOTE: As B. Hussein Obama continues to “negotiate with Iran” about their nuclear program, Iran’s president announces a plan to finance more Palestinian aggression against Israel in the hopes of driving them out of their land. Now, I ask you, what do you think will they do when they finally get a nuclear missile??  Mene, mene, tekel, upharsin…

As Iranian and Western negotiators in Vienna meet around the clock in a bid to strike a final nuclear accord, the Iranian president expressed his support for the Palestinian cause and urged the Islamic Republic to unite in its hatred of Israel.

“People will tell the world on the Quds Day that the Muslim nations will never forget Palestine and occupation of this territory,” Rouhani was quoted as saying on state-run television by the Fars News Agency.

Rouhani went on to state “that the Iranian nation will shout its hatred for the Zionists on the Quds Day,” according to Fars’ report.

“The Islamic Ummah will actually shout the call of unity on the Quds Day,” the leader added. Iran’s Foreign Ministry—the head of which is currently in Vienna leading efforts to strike a nuclear deal—also released a statement explaining the need to confront “the Zionists.”

“Reaching this goal” of retaking Jerusalem from the Israelis “needs confronting the Zionist regime’s aggression and expansionism and empowerment of Palestinians to resist against such measures, since resistance is the only way to restore their rights and free the Palestinian territories and the Holy Quds,” the Iranian Foreign Ministry said in its statement.

“Based on the guidelines of Supreme Leader of the Islamic Revolution (Ayatollah Seyed Ali Khamenei) the Islamic Republic of Iran believes that peace and tranquility will not be established in the Middle-East region but by full restoration of the oppressed Palestinian people’s rights, and the Palestinian nation will continue its legitimate and legal fight to restore its rights,” the statement added.

In related remarks, the General Staff of the Iran’s Armed Forces vowed to continue backing terror organizations and remain aggressive in fighting Israel. “The Iranian nation will remain in the frontline of support for the Islamic resistance and freedom of Quds [also known as Jerusalem],” the official was quoted as saying.

Meanwhile, a senior U.S. official who briefed reporters in Vienna on Tuesday indicated that the talks could end in a stalemate.

“Quite frankly, I’m astonished by the speculation in the press about the likelihood of getting to an agreement soon,” the official told reporters. “I just put that down to the fact that you all would like to go home.”

Differences still remain on several key issues, including the extent of Iran’s future nuclear work and the timing of sanctions relief. If decisions on these issues are made in the coming days, “we’ll get a deal. If they’re not, obviously we won’t,” the official said. source