Iran has built up its naval forces in the Gulf and prepared boats that could be used in suicide attacks, but the U.S. Navy can prevent it from blocking... 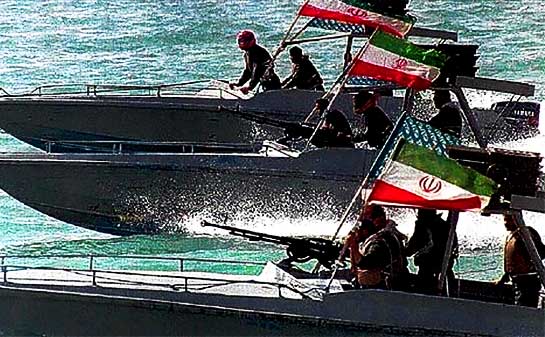 (Reuters) – Iran has built up its naval forces in the Gulf and prepared boats that could be used in suicide attacks, but the U.S. Navy can prevent it from blocking the Strait of Hormuz, the commander of U.S. naval forces in the region said on Sunday.

Iran has made a series of threats in recent weeks to disrupt shipping in the Gulf or strike U.S. forces in retaliation if its oil trade is shut down by sanctions, or if its disputed nuclear program comes under attack.

“We have watched with interest their development of long range rockets and short, medium and long range ballistic missiles and of course … the development of their nuclear program,” Fox, who heads the U.S. Fifth Fleet, said at a briefing on the fleet’s base in the Gulf state of Bahrain.

Military experts say the U.S. Navy’s Fifth Fleet patrolling the Gulf – which always has at least one giant supercarrier accompanied by scores of jets and a fleet of frigates and destroyers – is overwhelmingly more powerful than Iran’s navy.

But ever since al Qaeda suicide bombers in a small boat killed 17 sailors on board the destroyer U.S.S. Cole in a port in Yemen in 1996, Washington has been wary of the vulnerability of its huge battleships to bomb attacks by small enemy craft.

Asked whether the U.S. Navy was prepared for an attack or other trouble in the Gulf, Fox said: “We are very vigilant, we have built a wide range of options to give the president and we are ready… What if it happened tonight? We are ready today.”

Iranian officials have threatened to block the Strait of Hormuz, the outlet to the Gulf through which nearly all of the Middle East’s oil sails.

Asked if he took Iran’s threats seriously, Fox Said: “Could they make like extremely difficult for us? Yes they could. If we did nothing and they were able to operate without being inhibited, yeah they could close it, but I can’t see that we would ever be in that position.”

He added that diplomacy should be given priority in resolving the tension.

“So when you hear discussion about all this overheated rhetoric from Iran we really believe that the best way to handle this is with diplomacy… I am absolutely convinced that is the way to go. It is our job to be prepared. We are vigilant.”

Contacts between the U.S. Navy and Iranian craft in the Gulf region were routine, Fox said, referring to cases where his sailors helped Iranian ships that were in distress or threatened by pirates.

In addition to commanding the Fifth Fleet, Fox is also the commander of a multinational naval task force charged with ensuring Gulf shipping routes stay open. Although most of its firepower is American, the task force also includes other Western countries and the Gulf Arab states.

The European Union slapped an embargo on Iranian oil last month, which is due to kick in completely by July 1. The United States and EU have both imposed new sanctions on Iran’s central bank which make it difficult for countries to pay Tehran for oil and for Iran to pay for the goods it imports. source – Reuters