The air force commander of Iran’s Revolutionary Guard Corps was quoted by Iran’s Fars news agency as saying Tuesday that Iran’s military has its finger on the trigger to... 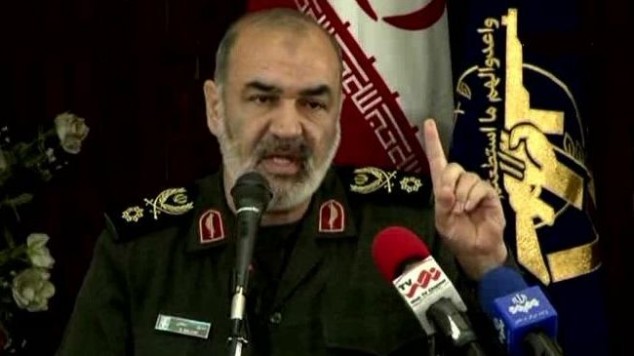 Iran: The air force commander of Iran’s Revolutionary Guard Corps was quoted by Iran’s Fars news agency as saying Tuesday that Iran’s military has its finger on the trigger to destroy Israel as soon as it receives the order to do so.

In an article headlined “IRGC Commander: Iran’s Finger on Trigger to Destroy Zionist Regime,” Fars wrote that Brigadier General Hossein Salami had declared that Iranian military commanders are prepared to attack and destroy the Zionist regime of Israel as soon as they receive such an order. “Today, we can destroy every spot which is under the Zionist regime’s control with any volume of fire power (that we want) right from here,” Fars quoted Salami as telling a conference in Tehran Tuesday on “The Islamic World’s Role in the Geometry of the World Power.”

Iranian leaders regularly issue threats against Israel and the United States, but the wording ascribed to Salami on Tuesday was particularly aggressive.

“Islam has given us this wish, capacity and power to destroy the Zionist regime so that our hands will remain on the trigger from 1,400 kilometers away for the day when such an incident (confrontation with Israel) takes place,” he was also quoted saying in the speech.

The comments came a day after Israel’s Prime Minister Benjamin Netanyahu presented a shipment of what he said were Iranian arms intercepted at sea last week, which he charged were intended for terror groups in Gaza. Netanyahu castigated the West for clinging to the illusion that Iran had changed, and said it remained relentlessly committed to fostering terrorism and advancing a nuclear weapons program.

Last month, Iranian state TV ran a documentary featuring a computerized video of Iran’s drones and missiles bombing Tel Aviv, Haifa, Ben Gurion Airport and the Dimona nuclear reactor in a hypothetical retaliation for an Israeli or American strike on the Islamic Republic.