Iran Fires Dozens Of Ballistic Missiles At US Troops As It Begins ‘Operation: ‘Martyr Soleimani’ And The 82nd Airborne deploys to the Middle East

“We’re going to war, bro,” one cheered, holding two thumbs up and sporting a grin under close-shorn red hair. He stood among dozens of soldiers loading trucks outside a cinder-block building housing several auditoriums with long benches and tables. Days after President Donald Trump ordered the drone killing of Iranian military commander Qassem Soleimani, raising fears of fresh conflict in the Middle East, the men and women of the U.S. Army’s storied 82nd Airborne Division are moving out in the largest “fast deployment” since the 2010 Haiti earthquake.

Iran has fired more than a dozen ballistic missiles at two Iraqi bases housing American troops in a revenge attack for the U.S. drone strike that killed a top Iranian general.

Iran has officially begun ‘Operation: Martyr Soleimani’ which is their official retaliation for  the killing of General Qassam Soleimani over the weekend. It began just a few hours ago with the firing of ballistic missiles from Iran in a cross-border attack on US forces in Iraq. The United States is right now at this moment sending waves of troops to the Middle East, including the 82nd Airborne from Fort Bragg in North Carolina.

There are no reports of US casualties or injuries at this moment, but that could well change as this story is still breaking and very much in progress. But know this, for Iran to do a direct attack and not do a proxy attack as they usually do is a very different tact the Iranians have taken. This is the most direct aggression we have seen from Iran in quite some time. Buckle up and stay tuned.

FROM THE DAILY MAIL UK: The Ain al-Asad airbase in western Iraq that was visited by Donald Trump in December 2018 and the Erbil base in Iraqi Kurdistan were both struck by the missiles on Tuesday at about 5.30pm (EST).

“We’re going to war, bro,” one cheered, holding two thumbs up and sporting a grin under close-shorn red hair. He stood among dozens of soldiers loading trucks outside a cinder-block building housing several auditoriums with long benches and tables. Days after President Donald Trump ordered the drone killing of Iranian military commander Qassem Soleimani, raising fears of fresh conflict in the Middle East, the men and women of the U.S. Army’s storied 82nd Airborne Division are moving out in the largest “fast deployment” since the 2010 Haiti earthquake. source

The Pentagon says the missiles were ‘clearly launched from Iran’ to target U.S. military and coalition forces in Iraq. There was no immediate word on injuries but security sources told CNN that there were Iraqi casualties at the al-Asad airbase.

President Donald Trump has been briefed on the attacks and Defense Secretary Mark Esper and Secretary of State Mike Pompeo were spotted arriving at the White House soon after news of the strikes broke. 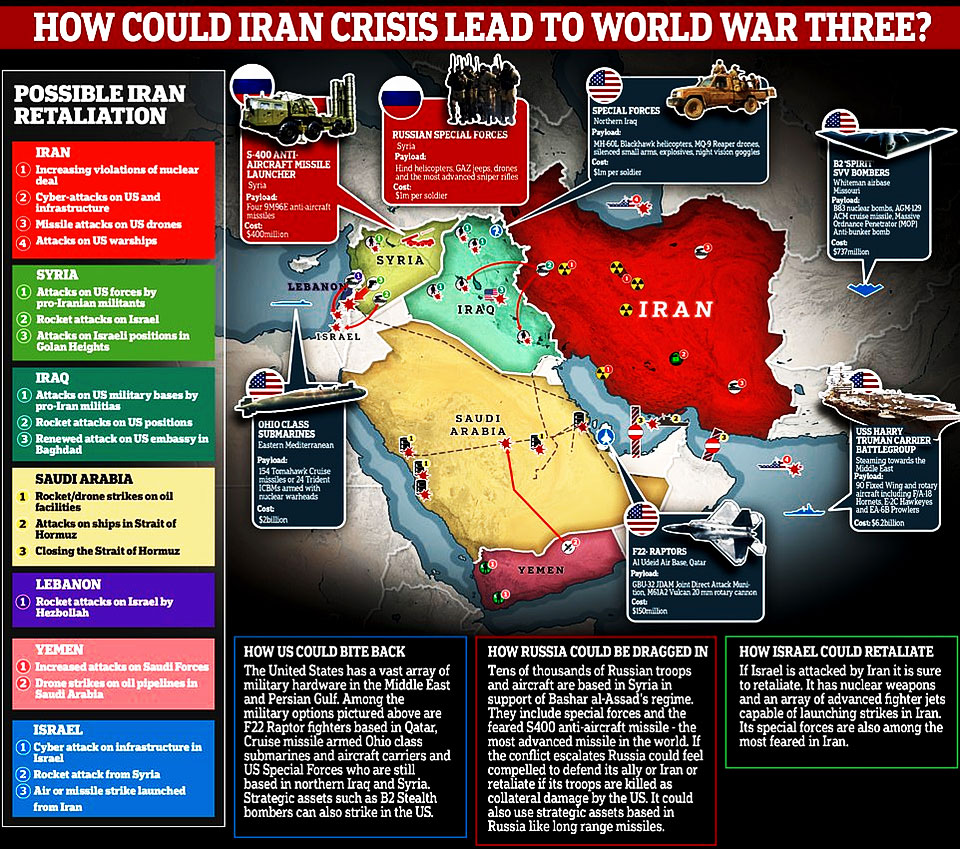 Iran’s Revolutionary Guards, which controls the country’s missile program, confirmed that they fired the rockets in retaliation for last week’s killing of Iranian general Qassem Soleimani, according to state TV.

They reported the operation’s name was ‘Martyr Soleimani’ and it took place just hours after the slain general’s funeral.  The rockets used in the attack, according to Iranian TV, were Fatteh-110 ballistic missiles, which have a range of 186 miles or 300km.

The Iranian air force has since deployed multiple fighter jets to patrol it airspace, according to reports – as Iran warned the U.S. and its allies in the region not to retaliate. READ MORE

Iran says it has launched “tens” of surface-to-surface missiles at Iraq’s Ain Assad air base housing U.S. troops over America’s killing of a top Iranian general.

Pentagon: Iran launches more than a dozen missiles against US troops in Iraq

Fox News’ Trey Yingst says reports can confirm that dozens of missiles have been fired from Iranian territory towards an Iraqi base that typically houses American forces.