An Iranian official called this week for an ‘Islamic Awakening’ movement to help Palestinian Authority Arabs “demolish the Zionist regime”, the IRNA news agency reported. The comments were made... 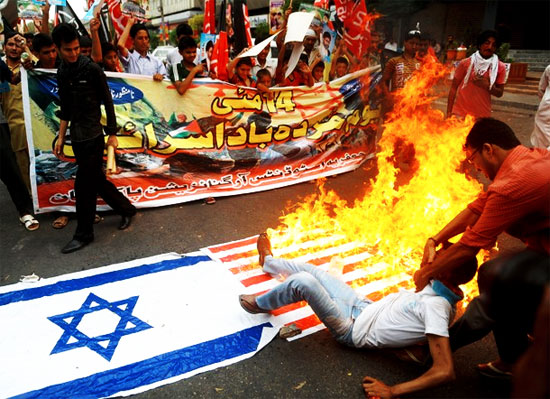 The comments were made at a conference in Tehran in honor of Nakba Day – the day of catastrophe – which is what the Arabs call the English date of May 15, when the State of Israel was re-established with a declaration of independence in 1948.

In a brief address at the end of the conference, the official, Hossein Shiekholeslam said, “In success of a revolution three major factors need to play effective roles, and they are the people, the leadership, and the school of thought, or ideology.”

He added, “If we wish success for the Palestinians, the existence of these three factors is necessary, as they did exist in the case of the victory of the Islamic Revolution of Iran.”

Sheikholeslam said that “In near future the Islamic Awakening movement would also swallow the Zionist regime.”

The first speaker at the conference, according to IRNA, was the PA Ambassador in Tehran, Salah Zawawi, who said that the one and only way to soothe the Arabs’ pains and agony is the annihilation of the Zionist regime.

“Turning the Palestinians into homeless people is a Zionist-western plot to enable the illegal Zionist immigrants to settle down at our ancestors’ motherlands, over the ruins of our homes,” he said.

“So long as the entire Palestinian groups have not united and each group is merely heeding its own factional interests the problems of this detached part of the Islamic world would never be solved,” he added.

Zawawi emphasized that many political projects have been launched aimed at “liberating Palestine” but that none have borne fruit yet. He said, “The Palestinians would never abandon the Holy Qods, as their capital city and I once again reiterate, political initiatives are not capable of liberating Palestine.”

He then claimed that Israel would never yield to the idea of establishing a solid Palestinian state and said, “Some 200 illegal and illegitimate townships have been constructed on the West Bank, but the U.S. president never referred to the illegitimate nature of those townships lest he would lose his presidential election campaign.”

Zawawi said that other Islamic countries should hold a conference aimed at surveying and finding a final solution for the “Palestinian issue” and added, “The Palestinian prisoners are not terrorists; they are merely brave men and women, defending their own motherland.”

“For decades, Israel has been building settlements in Jerusalem and around it,” Abbas said in a televised speech. “This is done while there is a massive destruction of houses in the city and their original inhabitants are being uprooted on a daily basis.”

Abbas also claimed that Israel intentionally harms the Muslim and Christian holy sites in Jerusalem, saying, “The Al-Aqsa Mosque is being targeted by the occupation and together with the extremists has become the main target. They are trying to make Muslims and Christians flee the city by imposing heavy taxes, a policy which can only be called ethnic cleansing.”

His comments came one day after Israel signed an agreement with PA prisoners to end their hunger strike, which has been gaining international sympathy.

The Prime Minister’s Office said on Monday that the deal that ended the hunger strikewas a goodwill gesture to Abbas.

Part of the deal was the transfer of 100 bodies of PA Arab terrorists currently buried in Israel. The Netanyahu administration instructed security officials to prepare to transfer the bodies to the PA in another apparent gesture of conciliation to Abbas.

Meanwhile on Tuesday, at least four Israeli security personnel were hurt in Nakba Day clashes with PA Arabs in Judea and Samaria.