Iran has begun mass production of an anti-ship cruise missile, state television's website said on Saturday. The Zafar missile, as it is dubbed in the report, "is a short-range,... 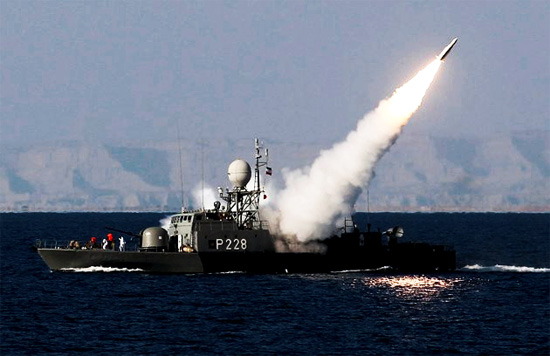 An Iranian warship fires a Mehrab missile during naval wargames in the Strait of Hormuz on January 1. Iran has begun mass production of an anti-ship cruise missile, state television's website said on Saturday. (AFP Photo/Ebrahim Noroozi)

It can be mounted on speed boats and other light vessels, can withstand electronic warfare, and is able to fly in low altitudes to avoid detection, the report said.

Iran has a fleet of speed boats that often challenge US and allied warships in the Gulf. The vessels are usually controlled by the elite Revolutionary Guards and can be equipped with missiles.

The Islamic republic says it has a wide range of missiles. It says some are capable of striking targets inside Israel as well as Middle Eastern military bases of its other main archfoe, the United States.

Tehran regularly boasts about developing missiles having substantial range and capabilities, but Western military experts cast doubt on its claims. Iran’s military said in January that it could close the strategic Strait of Hormuz in the Gulf, through which a third of global marine oil traffic passes, if it is attacked. source – Yahoo News