Rabbi Eckstein, Jews Need Jesus Just As Much As Food And Clothing And So Do You!

With Passover fast approaching, we are all seeing the commercials from Rabbi Eckstein of International Fellowship of Christians and Jews, asking for your money to support his cause. ... 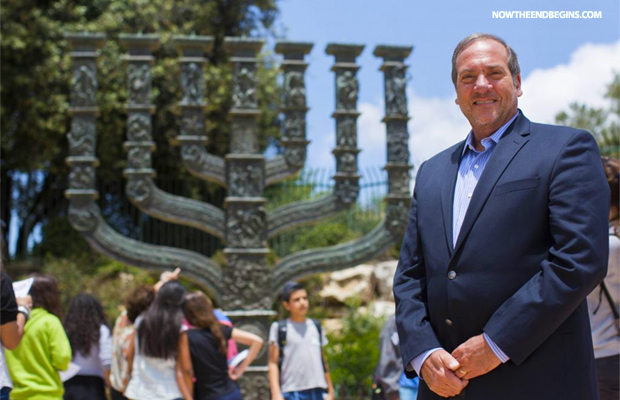 With Passover fast approaching, we are all seeing the commercials from Rabbi Eckstein of International Fellowship of Christians and Jews, asking for your money to support his cause.

“Brethren, my heart’s desire and prayer to God for Israel is, that they might be saved.” Romans 10:1 (KJV)

EDITOR’S NOTE: The bible clearly says that without Jesus Christ, Jew or gentiles, we have no hope of Heaven. When Jesus Himself preached that message in Israel 2,000 years ago, it was met with the same reaction from Jews then that it is now. But be that as it may, that’s the way that the God of Abraham has decreed it to be. People like Rabbi Eckstein and John Hagee make tens of millions of dollars from Christians who love the Jewish people, but they don’t ever tell the Jews that without Jesus they are going to Hell. That is wrong, and it’s the reason for this article. Please pray for Rabbi Eckstein to receive Yeshua and be saved, thank you!

Years ago, I began getting emails and mail from IFCJ. At first I thought that this was wonderful. But I wanted to vet this man to make sure he was on the up and up.  His commercials show Jews in Israel – so hungry, that they are fighting each other to get the boxes of food. He says “Jews are so poor, they cannot even afford to buy matzo for Passover.”

I knew many Christian believers who gave money religiously to Rabbi Eckstein. They seemed to think this man could do no wrong, and wanted to be a partner in supporting the Jewish people.

I told Rabbi Eckstein that he could not be saved without the forgiveness and belief in Yeshua. I never received a reply. But guess what? Even Jews need Jesus to get to Heaven.

I started reading about him. He was not a believer in Yeshua. As a matter of fact, he is an Orthodox Rabbi. I actually wrote to him several times, and told him of my belief in Yeshua.

A few years ago, I saw Rabbi Eckstein on a Christian TV station. He was singing Jewish songs, and talking about Judaism. It seemed to me that his purpose in doing this was perhaps to get his followers to become Jews. Now, with the Hebrew Roots cult abounding everywhere, I wonder how many of these folks were influenced by the Rabbi.

Before Moishe Rosen of Jews for Jesus went home to be with Yeshua, he wrote in “Moishe’s Musings” an article in which he spoke of Rabbi Eckstein. Here is an excerpt from his article:

“There is another kind of “lifestyle evangelism” that I can’t endorse. It’s the kind where people congratulate one another that actions speak louder than words, and that if others know they are a Christian, they need not say anything about Jesus so long as they live exemplary lives.

Isn’t it interesting that Rabbi Yechiel Eckstein, an Orthodox Jew, promoted this kind of evangelism in his article “Witnessing vs. Proselytizing,” which was posted online at the Christianity Today website. Eckstein concludes, “If Christians want to share their faith with Jews, they should start by being good friends and neighbors, and wherever possible, ‘good Samaritans.’ Evangelicals call this style of witnessing ‘lifestyle evangelism,’ and it seems to me a self-evidently superior form of outreach.” [Before you take that ringing endorsement of how to witness to Jewish people, you need to know that] Eckstein is a man of great sensitivity and tact, but he is not a believer and his goal is not to see other Jews become believers. Helping people win Jews to Christ would make Eckstein anathema in the Jewish community. Yet some Christians regard him as an expert on how to successfully share their faith. Ecktstein claims to uphold the Christian mandate to witness, but eventually he discloses his opinion that it is arrogant for Christians to think that Jewish people need Jesus.

I think that Christians should be concerned that Rabbi Eckstein has gained quite a platform among evangelical Christians. As reasonable and affirming of the Christian religion as Eckstein might seem, his commitment as an Orthodox rabbi is still at odds with those of us committed to seeing all people, including Jewish people, find salvation in Jesus.

I’m afraid that some Christians have been so flattered by Eckstein’s approach that the utter lack of logic in using him as an authority on Jewish evangelism escapes them. In a way, I am glad that Eckstein speaks so highly of “lifestyle evangelism” because it affords thinking Christians the opportunity to reflect on how to fulfill the Great Commission. The kind of lifestyle evangelism Eckstein praises centers on how nice people can be, whereas the Bible centers on why the cross is so necessary.” [1] – source

And then there is the matter of his income. Oy vey – WHAT an income!!

As the head of a nonprofit that is almost entirely supported by donations, what makes Yechiel Eckstein’s compensation noteworthy is its proportion to his organization’s overall income compared to other ministries. While the salary and benefit package of the head of the International Fellowship of Christians and Jews (ICFJ) is at least five times higher than any other leader of an Israel-related ministry, clocking in at $1.2 million, Eckstein’s compensation is more than double what the president of World Vision—a ministry with a budget 10 times larger—earns.

World Vision’s Richard Stearns earned $456,718 in salary and benefits in 2011, according to the organization’s tax return. But World Vision has a $1 billion annual budget, whereas last year IFCJ’s budget was $113 million. Meanwhile, Billy Graham, founder of the Billy Graham Evangelistic Association (BGEA), earned $228,448 in total compensation in 2011, and his son, Franklin Graham, president of BGEA, earned $115,307. The organization is similar in size to the IFCJ with $92 million in revenues in 2011.

Linda Lampkin, resource director for the Economic Research Institute office in Washington, D.C., calculated the average direct compensation for executive directors at similar-sized religious organizations and found Eckstein’s pay is well above the average, which is $276,807. The computer-generated comparison showed executive directors at organizations with similar-sized budgets—$100-$110 million—earned anywhere from $163,675 to $389,938 annually.

How much are those in charge of these Israel-related ministries actually making?

It’s often implied that any leader of a nonprofit ministry or organization who earns more than Mother Teresa is somehow gouging the public. Obviously, that isn’t true. Running a large organization—whether a college, a hospital or a church—is complicated and requires hard work. By not paying market-rate salaries, the talent needed to run such organizations tends to go to where he or she can be compensated commensurate with his or her ability. Even Jesus said a laborer for Him is worthy of his wages:

“For the scripture saith, Thou shalt not muzzle the ox that treadeth out the corn. And, The labourer is worthy of his reward.” 1 Timothy 5:18 (KJV)

Some organizations don’t like to reveal what their leaders make, however, because they fear donations would decrease if people knew. In the world of Christian ministries, that’s especially true—as proven by such examples as the short-lived “scandal” surrounding Franklin Graham’s compensation package as the head of both Samaritan’s Purse and the Billy Graham Evangelistic Association.

At the same time, in American culture there is a feeling that some financial matters should be out in the open. For example, it’s required by law that the public knows the salaries of elected officials. And those who run a publicly owned company must publicize the salaries of top management so investors can make investing decisions based on whether they feel those leaders are looking out for the investor or themselves.

Even the Bible says people do things differently in the light than in darkness. So in that spirit, Charisma inquired about the salaries of some of the ministries’ leaders.

We found ministry leaders’ pay ranged from zero to that of Eckstein. By comparison, leaders from three of the other largest Israel-related ministries earned substantially less: Jonathan Bernis earned $224,233 in total compensation (salary and benefits), Jews for Jesus Executive Director David Brickner earned $200,000 and Chosen People Ministries President Mitch Glaser earned $174,767. (The salary and benefit package of Christians United for Israel Executive Director David Brog could not be obtained.) Among the other ministries, no salary was above $90,500. And with Eckstein’s removed from the equation, the average salary of those leaders willing to disclose their compensation—and including those who take no salary—was $85,856.

How We Came Up With This Report

To begin its seven-month investigation into the financial stewardship of these ministries, Charisma requested financial information from each organization, along with an interview with its president or lead representative. We also obtained the 990 tax returns that some of the ministries voluntarily filed with GuideStar, which tracks the finances of more than 1.8 million IRS-recognized nonprofits. Under federal law, ministries are not required to publicly disclose tax returns, but some do so voluntarily to be financially transparent.

Having worked with many of the ministries in the past and seen their fruit up close through the years, Charisma’s intent was not to dig up any figurative buried skeletons, but instead to inform our readers as to the unique vision, purpose and scope of ministry for each organization. We believe financial stewardship goes hand in hand with this and, as a result, celebrate those Israel-related ministries that are taking every precaution to be faithful with what God has given them. [2] – source

Over $1 million a year?? That is absolutely sinful and wrong on so many levels. There is a word for a person like this in Yiddish – Goniff. It means a thief. I’m sorry to have to use this term, but what else can I call him? But what’s even worse is that he is refusing to tell lost Jewish people that they need Jesus to get to Heaven.

If you give to International Fellowship of Christians and Jews, you may want to find another organization to which to donate your money.

Do your homework! We have the Internet, and you can vet a person or organization very easily.

Please continue giving to the Jewish people. Some very good ministries help Jews in Europe to make Aliyah. Thank you for caring!