This weekend, a conference opens in Qatar to “defend” Jerusalem’s Arab status. The Emir of Qatar, Sheikh Hamad Bin Khalifa Al Thani, opened the “International Conference for the Defense... 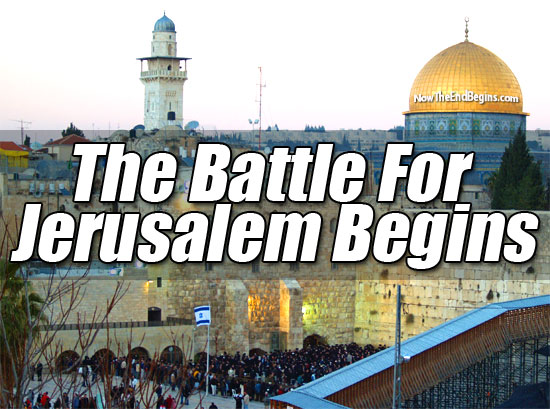 Palestinian presidential spokesman Nabil Abu Rudeina said the Palestinian leader will deliver an “important speech on the dangers Jerusalem is exposed to and the importance of Arab and Islamic support for the preservation of the holy city’s Arab character.”
by Geoffrey Grider February 27, 2012
NOW THE END BEGINS SHARE:

The battle for Jerusalem begins

“Behold, I will make Jerusalem a cup of trembling unto all the people round about, when they shall be in the siege both against Judah [and] against Jerusalem.” Zechariah 12:2

The word JERUSALEM appears in the King James Bible 767 times. It shows over and over again that it belongs to God, who has given it to the Jews forever. The bible also shows that Jerusalem will be in the eye of the storm in the last days. Welcome to the last days.

Palestinian presidential spokesman Nabil Abu Rudeina said the Palestinian leader will deliver an “important speech on the dangers Jerusalem is exposed to and the importance of Arab and Islamic support for the preservation of the holy city’s Arab character.”

From The Blaze: There have been marches, sermons, protest stunts and even vandalism aimed at undercutting Judaism’s links to Jerusalem and Israel’s sovereignty over the city. This weekend, a conference opens in Qatar to “defend” Jerusalem’s Arab status.

The Associated Press reports the Qatari ruler said in his opening remarks that the Arab identity in Jerusalem is threatened by Israeli expansion around the city. He also urged a U.N.-backed investigation into Israeli settlements and Israeli actions in Arab neighborhoods of east Jerusalem which Israel captured from Jordan in the 1967 Six Day War. Both Israelis and Palestinians claim Jerusalem as their capital.

Israeli Arab members of Knesset are also participating in the conference condemning Israel’s sovereignty in Jerusalem, the same city in which they serve and from whose government they collect their salaries. That they can travel to a conference hostile to the country where they are lawmakers and exercise their free speech provides counterpoint to the argument that Israel is an “apartheid” state as many pro-Palestinian activists claim. This comes as “Israel Apartheid Week” begins on U.S. campuses Monday.

…tackle Israel’s plans to “forge” the history of the holy city in addition to what they termed as ongoing violations of human rights committed against the Palestinian population, historic sites, cemeteries and Islamic heritage.

Speakers are expected to focus on the needed procedures to protect Jerusalem and the Al-Aqsa Mosque in light of the ongoing assaults by Israeli rightists and “Judaisation” efforts by the Israeli government.

Sessions at the two-day conference include “Jerusalem and International Law,” “History of Jerusalem,” “Jerusalem and Settlements” and “Israeli Violations.” The Qatar Tribune reports the international law session aims at “proving the illegality of the Israeli practices and violations in Jerusalem.”

“History of Jerusalem” will examine “how despite archaeological counterfeiting meant to prove the Israeli claim of historic right of Jews in Jerusalem remains weak.”

‘Jerusalem and Settlements’ deals with procedures for the systematic intensification of settlement and land confiscation in East Jerusalem , as well as the changes in their demography from 1967 to 2020, by which Israel aims to the establish Greater Jerusalem by expulsion and the displacement of the Arab population from East Jerusalem. It will also deliberate on the ways to rescue Jerusalem, the Arab vision against the Israeli plan – for the future of Jerusalem in 2020, which will depend on the development plans for various sectors to strengthen the steadfastness of Jerusalemites, and to emphasise the central role of Jerusalem in the Palestinian socio-political life.

Israeli Arab Member of Knesset Ahmad Tibi (United Arab List-Ta’al) who is traveling to the conference said, “The Arab world is committed to support the residents of al-Quds [Jerusalem] and galvanize the international community against the growing (Jewish) settlement of east Jerusalem, which is aimed at Judaizing the city that was conquered in 1967.”

According to Ynet, Palestinian presidential spokesman Nabil Abu Rudeina said the Palestinian leader will deliver an “important speech on the dangers Jerusalem is exposed to and the importance of Arab and Islamic support for the preservation of the holy city’s Arab character.” source – The Blaze