Incoming! 50 Rockets Fired From Gaza At Israel Over Weekend

Israeli security officials said seven other people were wounded, including two children, by more than 50 rockets fired from the Hamas-ruled territory Saturday. In Gaza, an Israeli air strike... 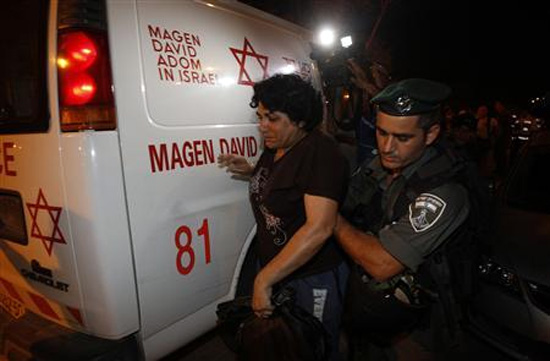 Israel getting attacked on all sides

(Reuters) – An Israeli man was killed on Saturday in a rocket strike launched from Gaza, medics said, the latest death in a three-day spasm of violence that has killed more than 30 people.

A militant group called the Popular Resistance Committees (PRC) claimed responsibility for the deadly rocket strike at a house in the southern city of Beersheba.

Hamas’s armed wing claimed responsibility for another attack that destroyed a home in the town of Ofakim.

It was the first time in months that Hamas had declared its involvement in rocket attacks against Israel, after largely observing a de facto truce since the end of a three-week offensive in January 2009.

“The Israeli army knows how to respond and the response will be painful. … The price will be very high,” he said on Channel 2 television.

Israel has launched aerial attacks on Gaza that have killed 15 people, among them gunmen and five civilians including three children, since a deadly assault along its border killed eight Israelis Thursday.

Eli Bein, a spokesman for Magen David Paramedic services, said an Israeli man had died in hospital of injuries suffered in the rocket strike in Beersheba. Television stations showed a bloodstained sidewalk and the twisted metal remains of a vehicle near in an area where the victim was apparently struck.

At least two more people were wounded seriously in the same barrage, paramedics and police said. An earlier rocket attack injured three Palestinian men from the occupied West Bank as they hid in a sand dune outside the Israeli city of Ashdod, a police spokeswoman said. A military spokesman said more than 50 rockets and mortars had been fired at Israel during the day and 75 since Thursday.

The steady rocket fire has disrupted life in much of southern Israel. Many shelter in safe rooms made of reinforced concrete when the frequent air raid sirens blare.

The Palestinian leadership “bears full responsibility for the murderous terror attacks against Israelis who were on vacation,” he said.

“The events of the past days prove that Palestinian talk of abandoning the path of terror and moving to diplomacy is as far from reality as the distance between Ramallah and the U.N. headquarters in New York.”

Hamas said Friday it would “not allow the enemy to escalate its aggression without getting punished.”

Israel has said the PRC was responsible for Thursday’s gun ambush on the Egyptian border, a charge the group has denied. Israeli forces killed the group’s commander in an air strike on Thursday.

Five Egyptian security personnel and seven gunmen were also killed in Thursday’s clashes, an incident that has sparked a crisis in Israeli-Egyptian ties with Cairo saying it was recalling its ambassador to Tel Aviv earlier Saturday. source – Reuters