In The End Times Doorknobs and Couches Could Be Watching You

Touché could let people manipulate their smartphones without taking the phones out of their pockets. Want to turn the volume down on some music? Users could stroke their palms... 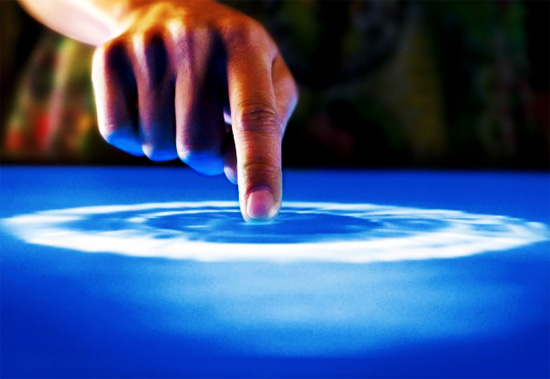 In the last times, inanimate objects come to life
by Geoffrey Grider May 5, 2012
NOW THE END BEGINS SHARE:

It looks like Disney Research is working toward making cutlery and furniture servants, a la Beauty and the Beast, a reality.

A team of engineers from the U.S. and Japan, including two engineers from Disney Research in Pittsburgh, has created an electrode that reads the electrical signals the human body gives off, to recognize a range of things people do. Embedded in a device, the electrode knows the difference between a two- and a three-finger pinch.

In the last times, inanimate objects come to life

In a tabletop, it recognizes elbows on the table. Worn as a wristband, it knows when its wearer is clasping his hands or covering his ears. The technology could turn anything into a touch-, gesture- and posture-sensitive device, from cellphones to couches to people’s bodies. The research team members will present their work May 7 at the Association for Computing Machinery’s human-computer interaction conference, where they’ve already won a best paper award.

Touch screens in devices today recognize the electrical signals the body gives off at one frequency. So they recognize two states: “Touch!” or “No touch.” The new technology, which researchers dubbed Touché, recognizes a range of frequencies, allowing Touché to recognize a range of states. So the system can recognize a variety gestures, including “two-finger pinch,” “three-finger pinch,” “one elbow,” “two elbows” and “all fingers touching like a plotting madman.”

Touché’s sensing electrode is small, inexpensive and doesn’t use a lot of power, Touché’s creators wrote in their paper. So manufacturers could embed it in a variety of devices. In their experiments, the researchers put the electrode in a doorknob, a tabletop, a piece of plastic shaped like a cellphone, wristbands people can wear and the bottom of a tank holding water. They demonstrated that in each of these objects, the electrode sent the data it gathered to a computer, via Bluetooth. The computer then correctly recognized all of the gestures mentioned above and more, including the dip of a fingertip in the water in the tank.

In a video presentation they prepared, the researchers imagined that Touché could let people manipulate their smartphones without taking the phones out of their pockets. Want to turn the volume down on some music? Users could stroke their palms and a wristband electrode could send the signal to the phone.

They also envisioned a cereal bowl that would recognize when small kids stick their fingers in and buzz them to remind them to use a spoon. And they imagined a couch that could sense when someone sat in it and turn on the TV in response. If the person fell asleep, relaxing his posture, the couch could dim the lights and turn the TV off. Seems almost as convenient as having a motherly, advice-dispensing teapot, or a footstool that can scuttle itself under your feet.

Want to learn more about the touch devices of the future? InnovationNewsDaily has covered a few of the other best papers from the same conference Touché’s creators are attending, including one about a system that would let users tap in a rhythm in place of keyboard shortcuts and another about a vending machine that asks computer science students to grade quiz questions in return for snacks. source – Mashable