In Pakistan, Islamic Hard-liners Expanding Their Grip on Society

The blasphemy laws of Pakistan are no joke. Mumtaz Hussain Qadri, a 26-year-old police guard for former Punjab Governor Salman Taseer, is being hailed as an Islamic hero for... 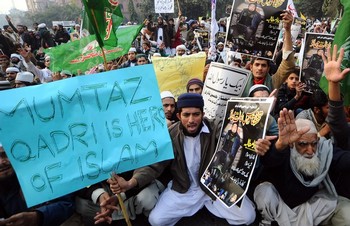 The killing of a governor opposed to the nation's blasphemy law, and the warm reception for his accused killer, has exposed Islamic fundamentalists' growing sway over the nation.
by Geoffrey Grider January 22, 2011
NOW THE END BEGINS SHARE:

The blasphemy laws of Pakistan are no joke. Mumtaz Hussain Qadri, a 26-year-old police guard for former Punjab Governor Salman Taseer, is being hailed as an Islamic hero for assassinating the man he was supposed to be protecting, all because Taseer dared to oppose Pakistan’s blasphemy laws. Quadri said he was inspired to murder the governor by a local cleric named Qari Hanif Qureshi who can be seen on a neighborhood banner declaring, “Anyone opposing laws protecting the sanctity of the prophet Muhammad is condemned!”

Pakistan’s blasphemy laws forbid damaging or defiling a place of worship or a sacred object, outraging religious feelings, defiling the Quran, defaming the prophet Muhammad, the use of any derogatory remark or representation in respect of Muslim holy personages, and prohibits Ahmadiyya (an Islamic sect originating from India) from behaving as Muslims behave, calling themselves Muslims, proselytizing, or “in any manner whatsoever” outraging the religious feelings of Muslims. Defiling the Quran merits imprisonment for life, while defaming Muhammad merits death with or without a fine. source: Wikipedia

The killing of a governor opposed to the nation's blasphemy law, and the warm reception for his accused killer, has exposed Islamic fundamentalists' growing sway over the nation.

The killing, carried out by a man who saw Taseer as an apostate for opposing Pakistan’s blasphemy law, has exposed the rising influence that Islamic fundamentalism has over Pakistani society, a mind-set that increasingly radicalizes the nuclear-armed nation, breeds intolerance and further weakens Islamabad’s feeble civilian government.

Led by clerics at the helm of the country’s religious political parties and its hard-line mosques and madrasas, the extremists demonstrated their reach after Taseer was assassinated in an upscale neighborhood of Islamabad. Days later, fundamentalist clerics rallied more than 40,000 people on the streets of Karachi in support of Qadri. A day earlier in Qadri’s Rawalpindi neighborhood, at least 4,000 people had gathered in front of the accused assassin’s house, chanting, “Salute to your bravery, Mumtaz!” source: LA Times 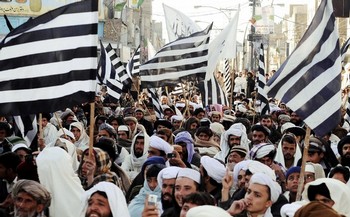 The rise of hard-line clerics and growing extremism in Pakistan is alarming not only to the secularists of Pakistan, but it is a dangerous sign for Washington who needs reliable allies in the so-called “war on terrorism.” The response that Governor Taseer’s assassination has drawn paints a bleak picture of how mainstream extremism has become in the region.