In 2018, Emmanuel Macron Raised The Sign Of Antichrist Over America, Now In 2020 He Needs President Donald Trump Taken Out Of His Way

Look at the expression on Macron's face, look how intense and sinister it is as he raised the sign of Satan over the White House and over America. Since that photo was taken, Emmanuel Macron has been on a nearly unstoppable trajectory upwards towards consolidating global power. He has become the de facto leader of the New World Order as it uses the trojan horse of the COVID-19 Plannedemic to seize power, but in 2020 as in 2018, one man stands in his way. Donald John Trump. In order to take firm control, Macron needs to either woo Trump to his side, or have him taken out of the way. That's where we are right now.

Look at the expression on Emmanuel Macron’s face, look how intense and sinister it is as he raised the sign of Satan over the White House and over America.

In a photo for which no reasonable explanation exists to this day, French president Emmanuel Macron held hands with President Trump and First Lady Melania on the balcony of the White House, and raised the twin signs of Antichrist over both of them. Lost people will look at this photo and their first thoughts will be along the lines of the Texas “hook-em horns”, or the heavy metal hand sign for “rock and roll”. We who are saved know the Devil when we see him, and his signs, and are not fooled with any meaningless distractions from the media.

“Lest Satan should get an advantage of us: for we are not ignorant of his devices.” 2 Corinthians 2:11 (KJB)

Look at the expression on Macron’s face, look how intense and sinister it is as he raised the sign of Satan over the White House and over America. Since that photo was taken, Emmanuel Macron has been on a nearly unstoppable trajectory upwards towards consolidating global power. He has become the de facto leader of the New World Order as it uses the trojan horse of the COVID-19 Plannedemic to seize power, but in 2020 as in 2018, one man stands in his way. United States President Donald John Trump.

In order to take firm control, Macron needs to either woo Trump to his side, or have him taken out of the way. That’s where we are right now.

Just yesterday, Emmanuel Macron had an urgent virtual meeting with President Trump, trying to get him on-board the coalition he has been busy building with the UN Security Council. The two leaders expressed hopes to convene the five permanent members of the UN Security Council soon to discuss a response to the coronavirus pandemic. Trump and Macron also talked about “critical regional and bilateral issues”, Deer noted. The men discussed “positive developments in combating the coronavirus pandemic and progress toward reopening world economies”. As of this writing, Trump is ‘weighing his options’, and it remains to be seen if he will support Macron as a member of the P5. If he does, that’s huge.

Then there’s the Time magazine cover that placed red devil horns at the top of his head, remember this? Interestingly, the article called for Macron to take control of all Europe if he was able to “reign over France” as he predicted he would. So far, he’s right on track for what he said he would do. In 2020, Emmanuel Macron is the recognized leader of the New World Order, but Trump is still standing in his way. Exactly what you would expect from a man whom God placed in office to give us a ‘window of grace‘ here in America. 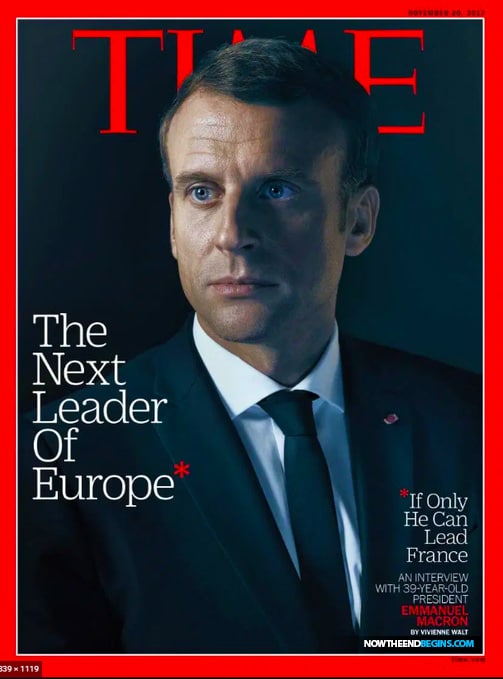 Now let’s take a look at a painting hanging on the wall of Macron’s presidential offices in Paris. It is very telling. Not only is the artist who painted it an anti-God, Communist-loving subversive, Shepard Fairey, at the bottom of the painting is a star symbol with a man’s face that, when turned upside down, becomes the symbol of Baphomet used in satanism. Not only that, when the artist explained his inspiration for the motif, it was jaw-dropping. But absolutely perfect for the man who might just be the forerunner to the actual Antichrist, or the man of sin himself. Fairey said that he was not commissioned to paint this for Macron, but when Macron saw it he became obsessed with purchasing it. Hmm. 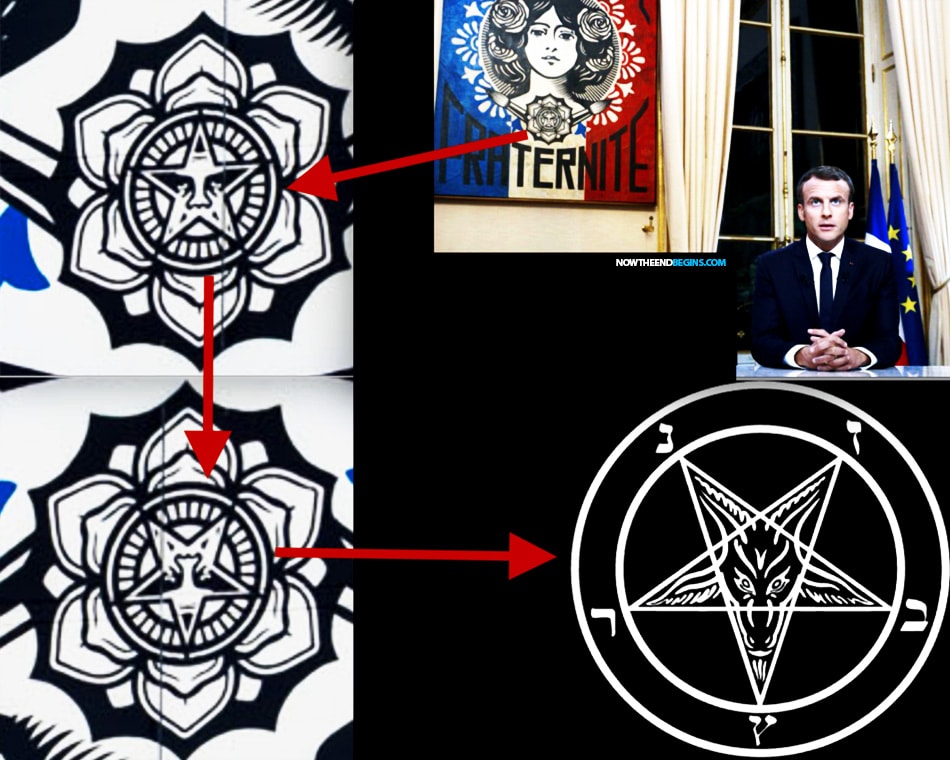 CLICK TO VISIT THE FRENCH END TIMES SITE WHERE I GOT THIS FROM, YOU WILL BE AMAZED AT WHAT THEY FOUND

In an interview, artist Shepard Fairey explained that he imagined and regularly distributed this “Orwellian” motif in reference to this allegorical film devoted to the manipulation of spirits by extraterrestrials disguised as human beings and wishing to enslave – in particular by the control of the political class, the media and the police – the world’s population. Fascinating, isn’t it, artist Shepard Fairey is so concerned with ‘population control’, isn’t that the whole point of Bill Gates’ global vaccines and Immunity Passports? Yep, sure is.

BONUS BOMBSHELL: Information has just come across my desk, we are sorting through it now, but suffice to say we have found proof of Jewish ancestry on both sides of Emmanuel Macron’s family tree. All we have to do now is find a link to the region of Assyria, and we have ourselves a match. We will keep you posted.

We will leave you with his video of Emmanuel Macron from his high school days, dressed as a scarecrow, and appearing to be looking up to Heaven towards God and mocking the crucifixion of Jesus Christ on the cross. If anyone reading this speaks French, we would love it if you would translate the narration and what Macron is saying, and post it in the comments, thanks!

Watch Teenage Emmanuel Macron Mock Jesus On The Cross, And Tauntingly Say He Has Become ‘Born Again’ While Looking To Heaven

We asked anyone who could speak French to translate, and as we suspected and can now confirm, Emmanuel Macron is this video is mocking Jesus on the cross and talking about how he was become ‘born again’. This man has been a bad seed from his earliest days, just like Judas the betrayer. (Many thanks to NTEB’er YehBoi2070 for the prompt translation, much appreciated!)