Implantable Device Propels Itself Through Bloodstream

Now, a new class of medical devices is emerging that adds a twist to the traditional implant: the devices are so small that they can travel through our bloodstream,... 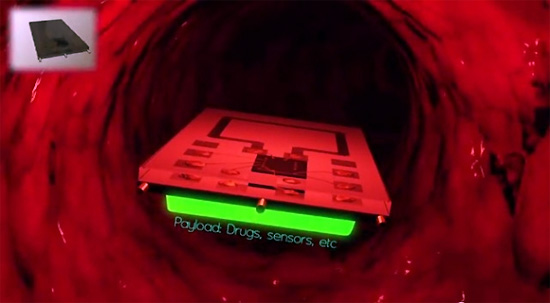 An artist's rendering of the chip, driven by magnetic currents, in an artery. (Credit: StrongBox3d,Carlos Suarez)
by Geoffrey Grider March 3, 2012
NOW THE END BEGINS SHARE:

RELATED STORY: Click here to read about the Mark of the Beast…

As implantable medical devices become smaller and less power hungry, they are taking on a variety of new roles. What began as largely stationary objects, such as pacemakers and cochlear implants, are becoming small enough to actually pass through our bodies (i.e. in the form of pills) to deliver drugs and perform diagnostics.

An artist's rendering of the chip, driven by magnetic currents, in an artery. (Credit: StrongBox3d,Carlos Suarez)

Now, a new class of medical devices is emerging that adds a twist to the traditional implant: the devices are so small that they can travel through our bloodstream, not to mention are powered wirelessly via electromagnetic radio waves, according to Stanford electrical engineer Ada Poon.

By moving through the bloodstream, these tiny implants will be able to perform minor surgeries such as removing blood clots, Poon told an audience at the International Solid-State Circuits Conference in San Francisco this week.

The device Poon demonstrated boasts an antenna just a few millimeters long. She admits in a news release that there is “considerable room for improvement” before her team can even begin testing these devices in clinical trials, but she has already been able to solve a longstanding power problem.

Thus far, it’s been impossible to get implantable devices small enough to enter the bloodstream because most implants are powered by batteries, which tend to take up a large chunk of a device’s volume. But Poon’s battery-less approach–relying instead on a radio transmitter outside the body to send signals to the implanted device via a tiny antenna–has also been considered impossible.

First, scientists have been unable to send high-frequency radio waves through human tissue without the strength degrading too quickly. Second, the low-frequency waves that can penetrate tissue require antennas too large to fit through arteries. It occurred to Poon that scientists might have been making a major assumption.

Instead of considering human tissue to be a good conductor of electricity, Poon wondered if it might be a type of insulator–a dialectric through which electrical signals do not flow but instead shift slightly between average equilibrium positions, thereby causing polarization. This turned out to be the case, and furthermore, she found that human tissue is a low-loss dialectric, meaning the signal does not fade dramatically.

Perhaps best of all, when Poon ran new calculations based on tissue being a dialectric instead of a conductor, she found that high-frequency radio waves can actually travel quite far into human tissue–which in turn means the antenna can be quite small; about 100 times smaller than previously thought, in fact (a few millimeters instead of centimeters). Poon’s devices are just proofs of concept at this point, but if her battery-less approach survives rigorous testing, we may soon be injecting, rather than implanting, some of our devices. source – CNET