This is far from the first time the Pope has addressed the condition of the working class in the globalized world; in a speech at the U.N. last year,... 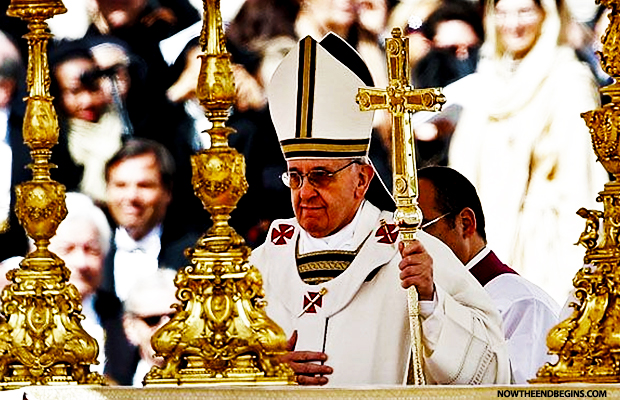 The Vatican’s treasure of solid gold has been estimated by the United Nations World Magazine to amount to several billion dollars. A large bulk of this is stored in gold ingots with the U.S. Federal Reserve Bank, while banks in England and Switzerland hold the rest. But this is just a small portion of the wealth of the Vatican, which in the U.S. alone, is greater than that of the five wealthiest giant corporations of the country. When to that is added all the real estate, property, stocks and shares abroad, then the staggering accumulation of the wealth of the Catholic church becomes so formidable as to defy any rational assessment.”

So image the level of gall it takes for this Pope to refer to money as “the Devil’s dung” when the corporation of which he is currently the head of hoards untold billions of it in stockpiles in Switzerland and around the world. Certainly if he were sincere, don’t you think he would start by immediately giving away a few billion just to show the rules he wants others to follow also applies to the Vatican as well? Evidentially, he does not.

In a speech at the U.N. last year, the Pope asked world leaders to redistribute wealth globally.

Speaking in Rome, Pope Francis condemned what he called a “throwaway culture created by the powers that control the economic and financial policies of the globalized world.”

But he proposed a solution of sorts, in the form of economic cooperatives that would help spread wealth equally: “Money at the service of life can be managed in the right way by cooperatives, on condition that it is a real cooperative where capital does not have command over men but men over capital.”

He quoted his namesake, St Francis of Assisi, in calling money the “devil’s dung,” according to Vatican Radio. “When money becomes an idol, it controls man’s choices,” he added. “It makes him a slave.”

This is far from the first time the Pope has addressed the condition of the working class in the globalized world; in a speech at the U.N. last year, the Pope asked world leaders to redistribute wealth.