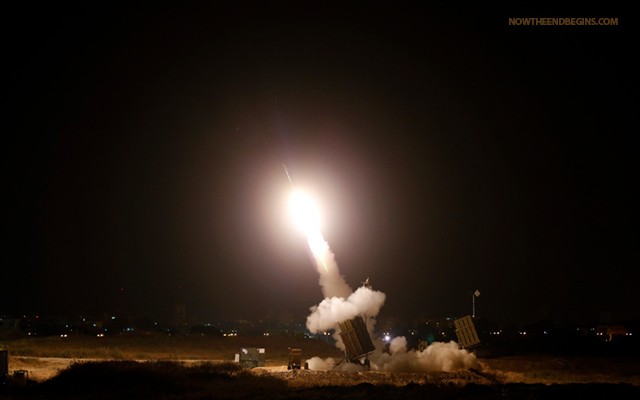 Earlier, air raid sirens rang out in Ashdod and the surrounding area and a rocket was intercepted over the city. There were no reports of injuries or damage from the rocket or the interception.
by Geoffrey Grider September 29, 2015
NOW THE END BEGINS SHARE:

The Israeli Air Force carried out a series of air strikes in the Gaza Strip overnight Tuesday-Wednesday, in response to a rocket fired from the Palestinian enclave earlier which was shot down by the Iron Dome anti-missile system over the southern city of Ashdod.

The IAF is said to have hit at least two targets belonging to Hamas south of Gaza City, according to Palestinian sources who spoke to Ynet. There were no immediate reports of injuries. Gaza-based social media users reported hearing a series of large explosions.

Earlier, air raid sirens rang out in Ashdod and the surrounding area and a rocket was intercepted over the city. There were no reports of injuries or damage from the rocket or the interception.

Sources in Gaza told the Times of Israel the rocket was shot from the center of Gaza.

An Islamic State-affiliated Salafist group by the name of Sheik Amar Hadid claimed responsibility for the rocket attack on social media, charging that it was a response to the fatal shooting of a young Palestinian woman at a checkpoint in the West Bank last week. Hadeel al-Hashlamon, 18, was shot last Tuesday at a checkpoint in the city of Hebron. The military said she was attempting to stab a soldier when troops opened fire.

Earlier, IDF sources said they believed the fire was part of an internal power struggle between the Hamas terror group and smaller Salafist groups, the Walla news site reported. Initial media reports had suggested two or more rockets were intercepted by the system. However video published to social media showed only a single interception.

An IDF spokesperson said she could not confirm the reports of more than one rocket. Police spokesman Micky Rosenfeld said police units were dispatched to search for an impact site and shrapnel.

The red alert sirens were the first to go off in Ashdod, some 40 kilometers from the Strip, since last summer’s war.

The attack came during the Sukkot holiday, when Jewish schools are closed and many people travel around the country to various festivals, include a number aimed at bringing tourists to the south following the devastating 2014 war, when thousands of rockets targeted Ashdod and other cities outside Gaza.

Israel has faced sporadic rocket fire out of the Strip since reaching a ceasefire with Hamas-led fighters from the Palestinian enclave in August 2014, ending the 50-day war. Much of the rocket fire since has come from Salafist groups, though Israel holds the Hamas terror group, which is the de-facto ruler of the Strip, responsible for all attacks emanating from Gaza.

Ashdod’s distance from the Strip likely indicates the use of a larger rocket than the type usually employed by smaller Salafist groups. Tensions between Israel and the Palestinians have run high for the past several weeks fed by clashes between Palestinians and Israeli forces on Jerusalem’s Temple Mount holy site.

However most of the violence has been centered in the capital and the West Bank, with Gazan groups mostly issuing harsh statements denouncing Israel. source