In the interview, he said “I read the Bible every day. I read the Quran every day, partly to understand some of the things happening in the world, but... 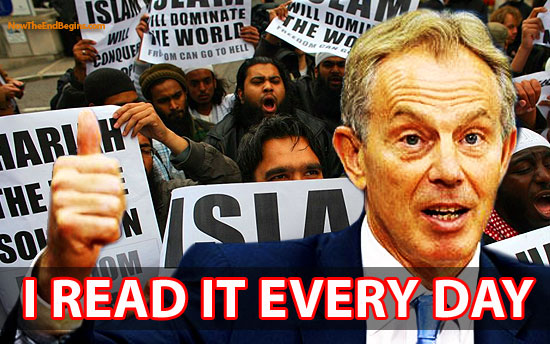 Blair, who was famously reluctant to discuss his faith during his time in office, converted to Catholicism months after leaving 10 Downing Street in 2007, and set up the ‘Tony Blair Faith Foundation’, to promote respect and understanding between the major religions.

In the interview, he said “I read the Bible every day. I read the Quran every day, partly to understand some of the things happening in the world, but mainly just because it is immensely instructive.”

Blair believes that knowledge of Islam informs his current role as Middle East envoy for the Quartet of the United Nations, United States, European Union and Russia.

This isn’t the first time that the former British Premier had spoken so highly of the religion. In 2006 he said the Quran was a ‘reforming book, it is inclusive. It extols science and knowledge and abhors superstition. It is practical and way ahead of its time in attitudes to marriage, women and governance’.

He praised the Muslim faith as being ‘beautiful’ and that the Prophet Mohammed (PBUH) as being ‘an enormously civilizing force’.

Last October, Blair’s sister-in-law Lauren Booth raised eyebrows after announcing that she had converted to Islam after what she described as a ‘holy experience’ during a visit to a shrine in Iran. source – Tribune UK

Note: Mr. Blair loves Islam so very much, that he allowed this to happen to England while he was running things.