Riots by Muslims that began on September 11, 2012, have reached Jerusalem, where demonstrations were held after Friday prayers at the Al-Aqsa mosque in the Old City. ... 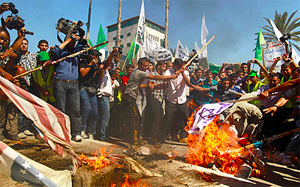 Riots by Muslims that began on September 11, 2012, have reached Jerusalem, where demonstrations were held after Friday prayers at the Al-Aqsa mosque in the Old City.

The protests began peacefully with several hundred people demonstrating on the plaza that holds both the Al-Aqsa and Dome of the Rock mosques, chanting, “With our blood and our soul, we will sacrifice for you our Prophet.”

Riots in Gaza over the film Innocence Of Muslims has spilled over to Jerusalem today.

But clashes broke out between a part of the crowd and Israeli police as the demonstration moved out of the Old City, with security forces firing tear gas and stun grenades that injured at least five people, an AFP correspondent said. Several policemen were reportedly hurt.

“Israel police are dispersing rioters at Damascus Gate, rocks and stones are being thrown at them,” police spokesman Micky Rosenfeld told AFP.

An AFP correspondent at the scene said demonstrators appeared to be trying to head to U.S. diplomatic premises in east Jerusalem, with Israeli police, some on horseback, seeking to prevent the protest from moving.

In Gaza, thousands of people rallied at demonstrations in Gaza City and the southern town of Rafah, a day after the ruling Hamas party urged citizens to turn out for protests after Friday prayers.

Hamas prime minister Ismail Haniyeh, in a sermon during Friday prayers, repeated a call on Washington to apologize for the film, produced in the United States.

“The US administration should apologize to the Arab and Islamic nation for this offensive film and bring these criminals to justice,” he said.

Haniyeh said the film was the result of “a Jewish-American-Crusader alliance to ignite a war on Islam and sectarian strife, particularly in Egypt.”

The amateur production called “Innocence of Muslims,” which was virtually unheard of before this week, has sparked violent protests across the Middle East.

The U.S. ambassador to Libya and three other US personnel were killed in a terror attack at the city of Benghazi, and four people were killed on Thursday when Yemeni police opened fire at a protest in Sana’a. source – Israeli National News