House To Vote Next Week To Block ObamaCare Funding

The House of Representatives will vote to block funding for President Barack Obama's signature healthcare overhaul when it takes up a budget plan it will consider next week, House... 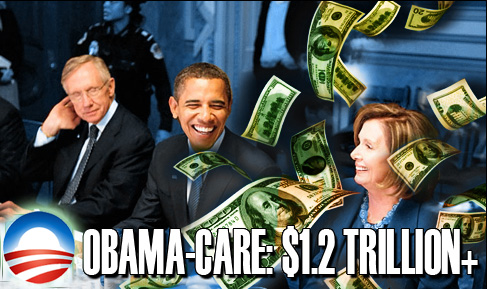 So now here we come to the first meaningful test of the Republican Revolution we had back in November. Will they or won’t they stop the Socialist takeover known as ObamaCare? Eric Cantor says they will, but just as we learned a painful lesson with RINO Scott Brown, perhaps we should brace ourselves for the outcome.

Can Republicans in the House turn the tide of Socialism?

(Reuters) – The House of Representatives will vote to block funding for President Barack Obama’s signature healthcare overhaul when it takes up a budget plan it will consider next week, House Republican Leader Eric Cantor said on Tuesday.

“I expect to see one way or other the product coming out of the House to speak to that and to preclude any funding to be used for that,” Cantor said at a news conference, referring to an effort to block implementation of the health-care law.

House Republicans aim to pass a spending measure next week that would immediately cut at least $32 billion from the government’s $3.7 trillion budget in an effort to trim record budget deficits. Republican lawmakers are expected to unveil details of the spending-cut package on Thursday ahead of a wide-ranging debate on the House floor next week.

Cantor did not say whether the cuts needed to block the healthcare law would be included in that package or offered in a separate amendment, but he said the final version that passes the House will include that language. The measure is not likely to get past the Democratic-controlled Senate, which has already rejected a stand-alone effort to repeal the healthcare law.