House Republicans passed a bill to repeal President Barack Obama’s health care plan Wednesday, taking their first major step toward rolling back the massive overhaul that has dominated the... 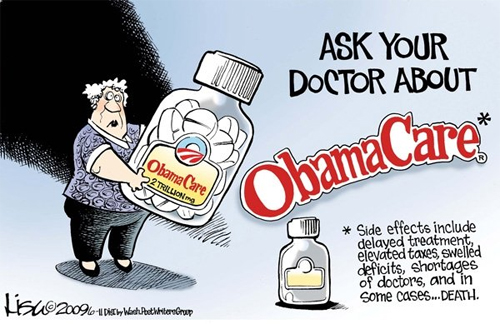 They stepped up? Republicans in the house have taken the first step in acting on their pledge repeal Obama’s health care plan today. At least for the moment, they have inspired a small amount of confidence in the effort to defeat the disastrous plan.

“This is not symbolic. This is why we were sent here,” said Michelle Bachman in response to today’s small victory in the House. Let’s all proceed with very cautious optimism without allowing our hopes to grow too high, as this is just the very tip of the iceberg. Do Republicans really have what it takes to stay in the fight to dismantle ObamaCare? We will be keeping a close eye.

The vote was 245 to 189, and unanimous GOP support gave the vote the same partisan feel of the March vote to pass the law, underscoring once again the hardened political lines of the health care debate. Only three Democrats backed the repeal, a smaller number than Republicans had once predicted. source: Politico

The bill passed today may not even stand a chance to reach the Senate floor, let alone be signed by the President if it ever made it to his desk. There is an uphill battle ahead for Republicans and for the nation as a whole, to clean up the monstrous mess that has been made by Obama and the former congress; the heat needs to stay turned up on these politicians to get the job done.

There is another battlefront to keep in mind, and it is one that Obama’s veto power cannot reach. More that half of the states have filed suits against ObamaCare, and Virginia has even ruled that mandating citizens to purchase health insurance is unconstitutional.

This fight is far from over, but we must stay in it to win it. There is far too much at stake for the future of America.