The drug, called Devil's Breath and also known by the scientific name Scopolamine, comes from the seeds of a tree called the Borrachero, which means ‘the drunkard’, and which... 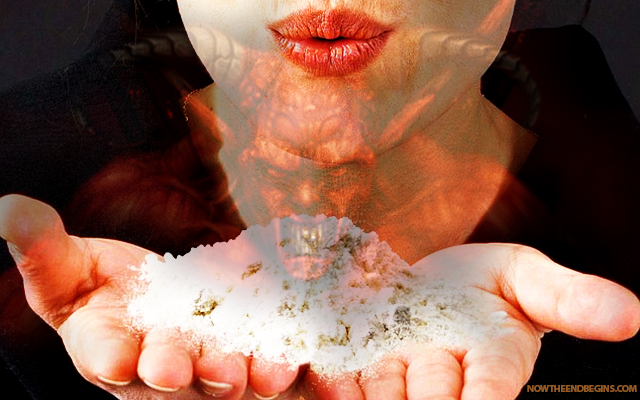 As the pair bend over a map, the Chinese woman blows a tiny dust cloud of white powder into the face of the helpful Parisian. What happens next is like something from a horror film.
by Geoffrey Grider September 3, 2015
NOW THE END BEGINS SHARE:

The drug, which is known by the scientific name Scopolamine, comes from the seeds of a tree called the Borrachero, which means ‘the drunkard’, and which grows throughout northern parts of South America, including in city parks.

Walking through the cosmopolitan streets of Paris’s 20th arrondissement, not far from rock star Jim Morrison’s tomb, a respectable, elderly lady is approached by a Chinese woman asking for directions. As the pair bend over a map, the Chinese woman blows a tiny dust cloud of white powder into the face of the helpful Parisian. What happens next is like something from a horror film.

There are reports that millions of euros have been stolen as a result of the drug’s use, and sent back to gangmasters in China.

For, unbeknown to the victim, this white powder is Devil’s Breath, a substance so toxic and powerful that it turns everyone who ingests it into what investigators call ‘zombies’, devoid of their own free will. Indeed, so suggestible does it make its victims that South American tribes used to administer the drug to the wives of dead chiefs, who, under tribal tradition, had to be buried alive with their husbands after they died.

Taken from the seeds of a plant which grows wild in Colombia, Ecuador and Venezuela — related to deadly nightshade — the drug meant these women could be persuaded to walk happily into the graves to their gruesome deaths.

Now, in a series of cases that have horrified police, the drug is being used by criminal gangs in Europe to drug unsuspecting victims who are then easily persuaded to hand over their most valuable possessions.

Among those recently robbed using Devil’s Breath was the elderly lady in Paris, one of at least 20 people targeted in recent days by a criminal gang in the French capital. The gang’s modus operandi seems almost too easy — they blow the drug into the faces of their victims, leaving them physically functioning, but mentally unable to resist orders. According to sources close to the French investigation, victims fell into a ‘hypnotic state under the total sway of their handlers’ after this powder was blown into their faces.

A police source added: ‘They got the victims to take them to their home, where they asked them to put all their jewellery and money into a bag and hand it over to them.’

Two Chinese women and a European man who belong to the gang are now under arrest, but the fear is that hundreds of others across Europe could already have fallen victim to such criminals, or will be attacked in the near future.

In a recent TV documentary, Devil’s Breath was dubbed by law enforcement officers as the ‘most terrifying drug in the world’. Miriam Gutierrez, a toxicology expert in Bogota, Colombia, explained: ‘From a medical point of view, it’s the perfect substance to commit criminal acts, because the victim won’t remember anything.’

It was once used as a ‘truth serum’ by America’s CIA, and even administered by Joseph Mengele, the Nazi’s so-called Angel of Death, during experiments on Jewish prisoners.

Because of the amnesia brought on by Devil’s Breath, investigating this new crimewave has proved problematic. Police smashed the ring only after a handful of victims contacted them, having vaguely remembered what happened. Victims admitted they had co-operated with thieves — and even handed over passwords and pins for bank accounts — in ‘dream-like’ states.

While one of the Chinese women in the gang blew the dust in her victims’ faces, the other told passers-by that she had a mixture of plants which had powerful medicinal qualities — and persuaded people to have a sniff.

‘They managed to isolate their victims, then got them to breathe in a mixture of plants, saying they had powerful curative qualities — even protecting them from misfortune,’ a police source told Le Parisien.

During a police investigation into the gang’s activities, detectives discovered the Chinese women had been operating from a hotel room in a drab suburb in the north of the French capital, where powder believed to be Devil’s Breath, along with weighing scales and surgical gloves, were discovered.

The gang is thought to be part of a much bigger criminal network operating across Europe and the U.S. There are reports that millions of euros have been stolen as a result of the drug’s use, and sent back to gangmasters in China.

Chinese authorities confirm that those arrested in Paris are part of a notorious criminal network, ‘which acts around the world and specialises in mental submission (of victims) with the aid of unknown products’.

The lethal qualities of Devil’s Breath should not be under-estimated: medical experts say that even a gram of powder is enough to kill, while lower quantities can result in hallucinations and a hypnotised state. source