Homeless US Marine Gives Last $20 To Keep Stranded Female Motorist Safe, She Gives Him His Life Back

Pulled over on the side of I-95, McClure, 27, was approached by a homeless man named Johnny. She was apprehensive at first, but Johnny told her to get back into her car and to lock the doors while he walked to get her help. He went to a nearby gas station, used his last $20 fill a can and brought it back to fill up her car. Grateful, but without a dollar to repay him, McClure promised she would come back with something.

Kate McClure didn’t expect to run out of gas on her drive to Philadelphia last month. And she definitely didn’t expect that her misfortune would give her the opportunity to change someone else’s life.

“Every man according as he purposeth in his heart, so let him give; not grudgingly, or of necessity: for God loveth a cheerful giver.” 2 Corinthians 9:7 (KJV)

EDITOR’S NOTE: I don’t know if the homeless Marine in this story, Johnny, is a Christian or not. Or if the women he so selflessly helped is, either. But the type of sacrificial giving they both extended to each other is exactly what the Bible teaches on how Christians are supposed to give when they see a need. The grateful woman, Kate McClure, set up an ambitious $10K GoFundMe page to see if she could get Johnny off the streets. So far she has raised $233,308. God’s timing is always the right timing, thank you Lord for reminding me of that. Semper Fi.

Pulled over on the side of I-95, Kate McClure, 27, was approached by a homeless man named Johnny. She was apprehensive at first, but Johnny told her to get back into her car and to lock the doors while he walked to get her help. He went to a nearby gas station, used his last $20 fill a can and brought it back to fill up her car.

Grateful, but without a dollar to repay him, McClure promised she would come back with something. 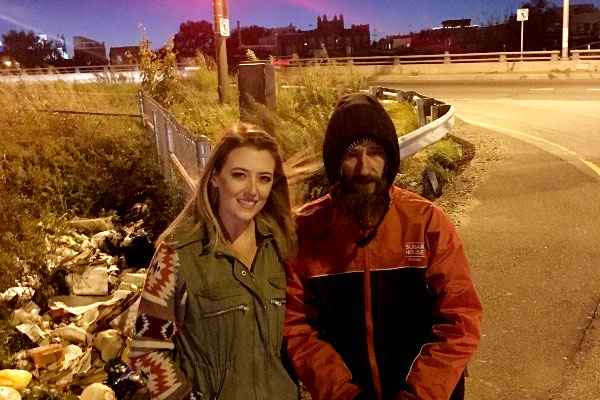 In the weeks since, she’s returned to the spot along I-95 where Johnny stays with cash, snacks and Wawa gift cards. Each time she’s stopped by with her boyfriend, Mark D’Amico, they’ve learned a bit more about Johnny’s story, and become humbled by his gratitude.

Eventually, the Florence Township couple knew they had to do something more.

So they launched a GoFundMe campaign, putting an ambitious $10,000 goal and hoping to rein in a few hundred dollars to book Johnny a motel for a few nights where he could clean up, and start to get back on his feet.

“It just blew up,” McClure said, noting that donors have come forward with $5, $10 or even several hundred after she’s shared the GoFundMe to various Facebook groups. Johnny, who’s 34, told McClure and D’Amico he has been homeless for about a year. He said he was previously a certified paramedic, and also served in the Marine Corps.

After moving around the country for a time, he came to Philadelphia a year ago with a job lined up and some money to buy a truck. But soon after the job fell through, leaving Johnny surviving off meager savings.

Later, he lost his paperwork, rendering him unable to work. One night on the streets turned into a week, and ultimately a year of homelessness.

“Driving into Philly one night, I made the mistake of thinking that I would be able to make it all the way down I- 95 with my gas light on. Needless to say, I was wrong. I never ran out of gas before, and my heart was beating out of my chest. I pulled over as far as I could, and got out of the car to head to the nearest gas station. That’s when I met Johnny. Johnny sits on the side of the road every day, holding a sign. He saw me pull over and knew something was wrong. He told me to get back in the car and lock the doors. A few minutes later, he comes back with a red gas can.  Using his last 20 dollars to make sure I could get home safe.” – Kate McClure

Learning his story, and sifting through his old Facebook photos, McClure and D’Amico said they were shocked to see how quickly Johnny’s life had changed from that of a working man who vacationed on the beach to one living off the streets of Philadelphia.

“It’s crazy, you can relate to that,” McClure said. “You look through and think, ‘that could be me.’”

Last week, they surprised Johnny with the campaign, telling him they had already raised $1,700 and planned to keep going.

“That changes my life, right there,” Johnny said of the $1,700, captured in a video McClure took. “I’ve honestly met more good people than bad,” he said of his time in Philadelphia. The couple understands how their help in reaching out to landlords and vouching for Johnny’s character will help him overcome some of those hurdles.

“If we just handed him the money, it’s not going to happen,” McClure said.

Johnny has started the process of getting his paperwork replaced, as he’s currently without identification or Veteran’s Affairs papers, McClure said. He hopes to get a job at the Amazon warehouse in Robbinsville, and down the road, hopes to take the test to become recertified as a paramedic in Pennsylvania or New Jersey.

And McClure and D’Amico are confident they can get him started on that path soon, hoping to place him in a room to rent in an apartment within two weeks as they continue to fundraise.

“When I still look at (the GoFundMe), it blows my mind,” McClure said. “It’s actually going to happen for him.” source

UPDATE: So far people have donated $210,305 to help Johnny get his life back.