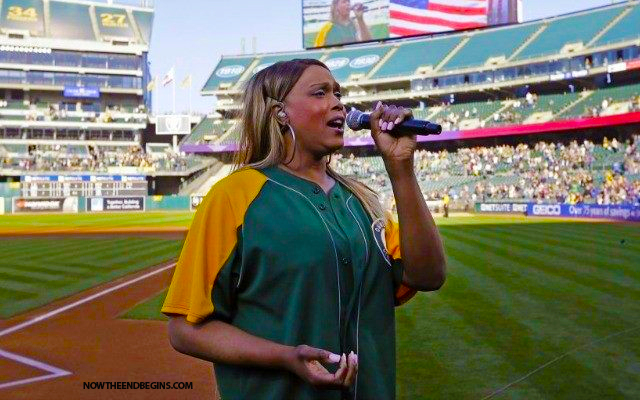 “Even as Sodom and Gomorrha, and the cities about them in like manner, giving themselves over to fornication, and going after strange flesh, are set forth for an example, suffering the vengeance of eternal fire.” Jude 1:7 (KJV)

EDITOR’S NOTE: Obama’s most enduring legacy will be that he single-handedly converted America into an LGBT nation. National acceptance of homosexuality and other deviant behavior preceded the fall of both the Greek and Roman empires. You are watching America’s fall from grace, God will not allow this to go unpunished.

Sinclairé, a classically-trained opera singer, took to the mound at Oakland’s O.co Coliseum to belt out the Star-Spangled Banner before the A’s faced off against the San Diego Padres in the first game of a two game series.

“It means a lot. I feel very honored,” Sinclairé told the Associated Press of the experience. “I used to be homeless in New York City. I think from being homeless to getting my bachelor’s degree and my master’s degree to this, it’s just kind of mesmerizing to me to have such a group of people that support me and love me and want to see me succeed. I’m so thankful for them.”

Sinclairé’s performance came on Athletics Pride Night at the Coliseum. The A’s honored Glenn Burke, baseball’s first openly gay player, who played for the team between 1978-1979. Burke died of complications from AIDS in 1995.

“I’ll tell you as a player if I had seen that, I would’ve passed out,” Bean told the San Jose Mercury News of Sinclairé National Anthem performance. “Today is a perfect win for this organization and for baseball.” source