Josh Canfield and Reed Kelly, billed as the Broadway Boyfriends on the reality show "Survivor: San Juan del Sur — Blood vs. Water," were engaged at their Jan. 28 54 Below concert, From Broadway to Survivor

“We have a lot of gay men and women in our church and I pray we always do.” – Pastor Carl Lentz, Hillsong NYC

UPDATE: HILLSONG RESPONDS –  After this story went viral with hundreds of thousands of global views, Hillsong responded not once but twice today to this article. Read it here now.

Hillsong Church in New York City attracts over 7,000 energized worshippers every week. It’s pastor, Carl Lentz, has a half-shaved head, ripped jeans, is covered with tattoos and draws a celebrity audience of people like Justin Beiber and NBA star Kevin Durant. When it comes to the topic of same-sex marriage, however, their official position is shrouded in half-answers and obfuscation. But one thing is quite clear: they allow an openly and unrepentantly gay couple to lead their choir.

Josh Canfield, in an interview with Playbill.com, said this in January of 2015: ” I became truthful with my church. I’m a part of Hillsong NYC. I’m one of their choir directors. I also sing on their Worship team. They’ve been amazing as well. Nothing has changed there now that I’m completely out and with Reed. He sings in the choir as well.” source

Josh Canfield and Reed Kelly, are a proudly-out homosexual couple who preach the gospel of the LGBT Agenda. They became “engaged” last year and are planning a “wedding” for sometime in 2016. They feel no conviction of any kind for the lifestyle they lead, and yet, shockingly, they are allowed to lead the worship choir during church services. Pastor Lentz, when asked about homosexuality, had this to say:

“Jesus was in the thick of an era where homosexuality, just like it is today, was widely prevalent.  And I’m still waiting for someone show me the quote where Jesus addressed it on the record in front of people.  You won’t find it because he never did,” he said.

Well, if Pastor Lentz would turn down the Marshall stacks on his platform and open his Bible, he would find exactly where Jesus condemned homosexuality. All through Matthew, Mark and Luke, Jesus preached an adherence to the Law of Moses, as we see here:

“For verily I say unto you, Till heaven and earth pass, one jot or one tittle shall in no wise pass from the law, till all be fulfilled.” Matthew 5:18 (KJV)

And what does that same Law that Jesus commanded be kept have to say about homosexuality? Read it for yourself, Pastor Lentz:

“If a man also lie with mankind, as he lieth with a woman, both of them have committed an abomination: they shall surely be put to death; their blood shall be upon them.” Leviticus 20:13 (KJV)

That God is against homosexuality is a theme that is repeated three times in the New Testament as well, so even the most least-read Bible student should be able piece together what the Bible’s ultra-clear stand on homosexuality might be. But this seems to be a feat unable to be accomplished within the Hillsong theology circles.

“And unto the angel of the church of the Laodiceans write; These things saith the Amen, the faithful and true witness, the beginning of the creation of God; I know thy works, that thou art neither cold nor hot: I would thou wert cold or hot. So then because thou art lukewarm, and neither cold nor hot, I will spue thee out of my mouth.” Revelation 3:14-16 (KJV)

But an inability to understand Scripture is not the problem with Hillsong Church, in New York City, in Australia, or around the world. The problem is money. The Hillsong Church global corporation is a multi-million dollar cash cow that provides an opulent lifestyle for all it’s leaders. And the millions of dollars that now flow in from parishioners would come to a grinding halt if they ever started preaching Bible truth. The only reason why thousands line up to attend their services is because there is no conviction of sin, no preaching about Biblical righteousness, no hard truths from the Scriptures. What they get is a “christian” rock concert with strobe lights and massive video displays, so that the people who were out in the clubs the night before will feel right at home. 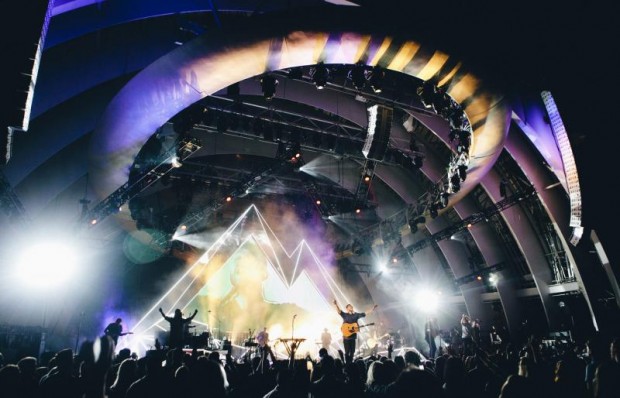 The Illuminati pyramid topped off by what looks like a huge snake in a circle, this is what your average Hillsong United “worship service” looks like. Do YOU see Jesus anywhere in here?

Personally, I believe that a true Bible church should be reaching out to the homosexual community as it would reach out to any other people group who are in need of salvation. But as a pastor, when homosexuals attend your church, you have a sacred, sworn obligation to tell them that what they are doing is a sin that needs to be repented of. Failure to do so will result in the blood of these people, spiritually, being on your hands, and you will give an account at the Judgment Seat of Christ for why you didn’t preach the truth to them when you had the opportunity to do it.

Carl Lentz, are you listening?

SOURCES FOR THIS ARTICLE:

Josh Canfield, in an interview with Playbill.com, said this in January of 2015: ” I became truthful with my church. I’m a part of Hillsong NYC. I’m one of their choir directors. I also sing on their Worship team. They’ve been amazing as well. Nothing has changed there now that I’m completely out and with Reed. He sings in the choir as well.” http://www.playbill.com/news/article/broadway-boyfriends-of-survivor-get-engaged-on-stage-plus-video-340487/print

From an article in the NEW YORK TIMES newspaper: Some of Hillsong’s churches appear to be open to gays and lesbians. Josh Canfield and Reed Kelly, a gay couple featured on the current season of “Survivor;” worship and sing in the choir at Hillsong New York; Mr. Canfield is a volunteer choir director at the church.http://www.nytimes.com/2014/10/18/us/megachurch-pastor-signals-shift-in-tone-on-gay-marriage.html

From in interview in the Christian Post: Hillsong pastor Carl Lentz said “”We have a lot of gay men and women in our church and I pray we always do.” http://www.christianpost.com/news/jesus-never-discussed-homosexuality-publicly-says-megachurch-pastor-of-his-refusal-to-talk-openly-about-gay-marriage-120918/