“I knew exactly what I was doing – I was going for broke,” she told Playboy in the magazine’s April interview. “I had reached the point of no return.... 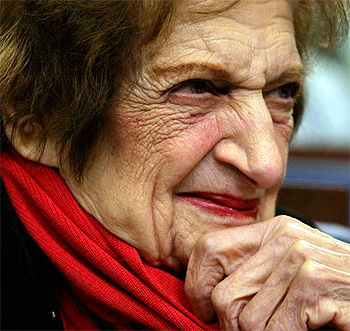 Helen Thomas is not sorry, nor were the comments that ended her career accidental

“I knew exactly what I was doing – I was going for broke,” she told Playboy in the magazine’s April interview. “I had reached the point of no return. You finally get fed up…I finally wanted to speak the truth.” Thomas, of course, left her perch as the dean of the White House press corps last year, after telling a rabbi and blogger that that the Jews should “get the hell out of Palestine” and “go home” to “Poland, Germany and America and everywhere else.”

Her family is Lebanese and she grew up in the Detroit area, home to one of the country’s densest populations of Arab Americans. She spoke to Playboy at length about the situation in Palestine, her feelings on American support of Israel, and her take on the Jews.

But her most controversial comments echoed ones she’s made before about the influence of Jews in American life, which have contributed to her name being stripped from journalism awards.

“[The Jews are] using their power, and they have power in every direction,” she told Playboy. “Power over the White House, power over Congress…Everybody is in the pocket of the Israeli lobbies, which are funded by wealthy supporters, including those from Hollywood. Same thing with the financial markets. There’s total control…It isn’t the two percent. It’s real power when you own the White House, when you own these other places in terms of your political persuasion. Of course they have power. [To the interviewer] You don’t deny that. You’re Jewish, aren’t you?” source – Politico