Hawaii's state Senate overwhelmingly approved a bill Wednesday to celebrate "Islam Day" -- over the objections of a few lawmakers who said they didn't want to honor a religion... 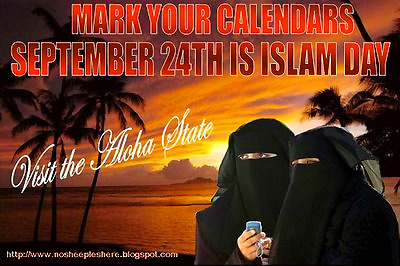 September 24th is now ISLAM DAY in Hawaii. Are you KIDDING me???
by Geoffrey Grider May 24, 2012
NOW THE END BEGINS SHARE:

While you were sleeping…

Is it just us, or did you also not know that back in 2009, the State Senate of Hawaii overwhelmingly passed a bill to recognize September 24th as Islam Day?? Well, they did….

From Fox News: Honolulu — Hawaii’s state Senate overwhelmingly approved a bill Wednesday to celebrate “Islam Day” — over the objections of a few lawmakers who said they didn’t want to honor a religion connected to Sept. 11, 2001.

September 24th is now ISLAM DAY in Hawaii. Are you KIDDING me???

The Senate’s two Republicans argued that a minority of Islamic extremists have killed many innocents in terrorist attacks.

“I recall radical Islamists around the world cheering the horrors of 9/11. That is the day all civilized people of all religions should remember,” said Republican Sen. Fred Hemmings to the applause of more than 100 people gathered in the Senate to oppose a separate issue — same-sex civil unions.

The resolution to proclaim Sept. 24, 2009, as Islam Day passed the Senate on a 22-3 vote. It had previously passed the House and now goes to Republican Gov. Linda Lingle.

Republican Sen. Sam Slom argued that the United States has become too sympathetic toward Islamic extremists.

“I don’t think there’s any country in the history of the world that has been more tolerant than the United States of America, and because of that tolerance, we’ve looked the other way a lot of times, and many thousands of our citizens have been killed by terrorists,” said Slom, a Republican.

The lone Democrat voting against the bill opposed it on church-state separation fears. source – Fox News